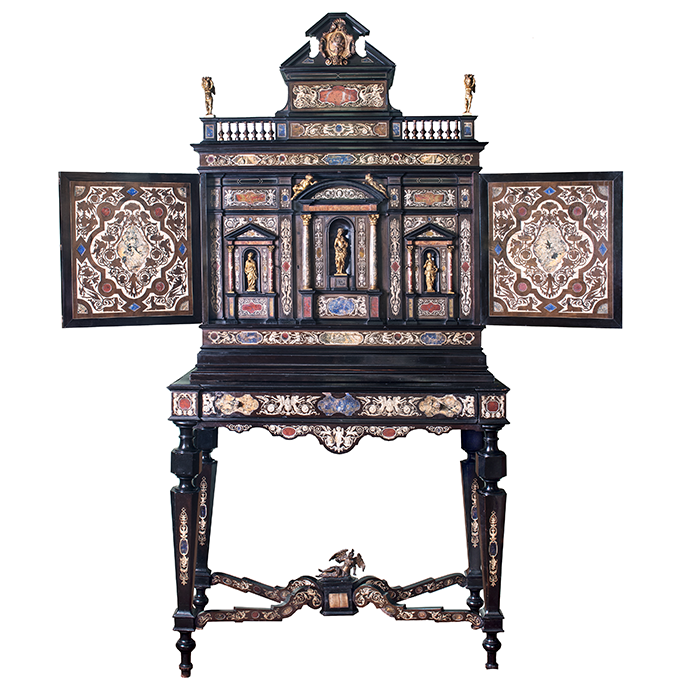 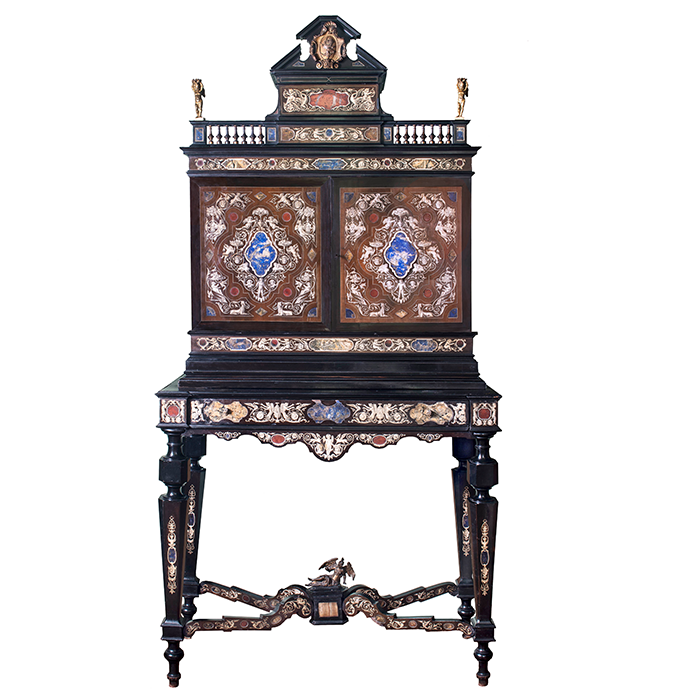 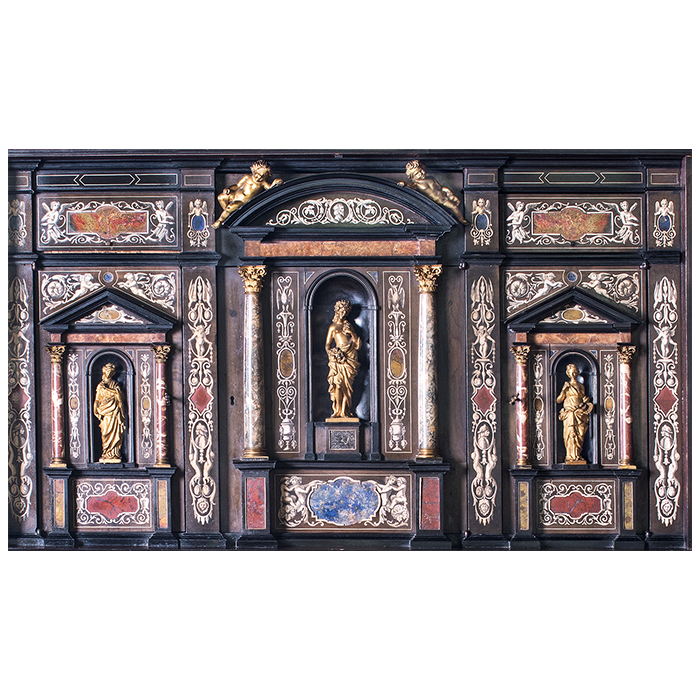 The refined ebony wooden cabinet we’re analysing was realized by one of the most thriving Tuscan workshops in the nineteenth century. According to the local dialect, it was originally called stipo or monetiere, but we don’t have enough information to prove the origin of the term.

From the mid nineteenth century, the frontal panels of similar pieces of furniture were inspired to the facades of the most renowned buildings, just like that of the cabinet we’re analysing. Realized according to the Corinthian architectural order, it’s embedded in a little larger ebony case whose external panels are skilfully inlaid with some refined ebony items.

Two superb Corinthian columns divide the frontal panel into three smaller spaces. A niche is contained in each of them. The central one is undoubtedly bigger than the side ones, just like the allegory it contains – Nature – when compared with the other ones, Painting and Sculpting.

Joined together, by an iconographic point of view mainly, all the allegories are meant to enhance the artwork. It resulted from the Tuscan woodcarvers’ huge skills and the high quality of the materials they used to realise it. In other words, the cabinet is meant to be the iconographic synthesis of Nature, Painting and Sculpting finely joined together.

Two tiny cupids are located above the central niche. They are very similar to the four marble allegories Michelangelo Buonarroti realized to adorn Giuliano and Lorenzo de Medici’s graves at San Lorenzo church in Florence.

A fence looking arcade all over the lintel delimits a wide shelf extending forward. It’s very similar to the roof decks modern biggest buildings show. Two tiny finely sculpted cupids, holding a wreath each, are at its front corners.

On the top of the shelf we can appreciate such a refined triangle shaped gable. Nieri’s medal looking coat of arms leans out of its central part. Surrounded by some garlands, with a shell shaped item at the top and an odd mask at the bottom, it shows a stripe adorned with three roses in front of a powerful lion holding a sword.

Two doors hide several tiny drawers where the owners were supposed to save some precious items of theirs like antique coins, medals and many other valuables. The forward building facade looking panel leans on a refined flap opening table. It has four truncated cone shaped legs, whose lower sections are joined with a finely inlaid crosspiece. A Nike lying on the side is skilfully sculpted at its central part as well.

The cabinet was realized by a skilful Florentine woodcarver as all the ivory, marble and precious stone inlays can surely prove. All the floral, garland, anthropomorphic and zoomorphic decorative items are meant to honour the Tuscan Grand Duchy, by an allegorical point of view mainly.

Such an elegant artwork is then adorned with the oval shaped ivory medals containing the customer’s and his kin’s portraits. Because of its undeniable originality, it’s meant to be a model the modern pieces of furniture could be inspired by. Since it has been greatly preserved, it could be kept at some of the most important international museums.