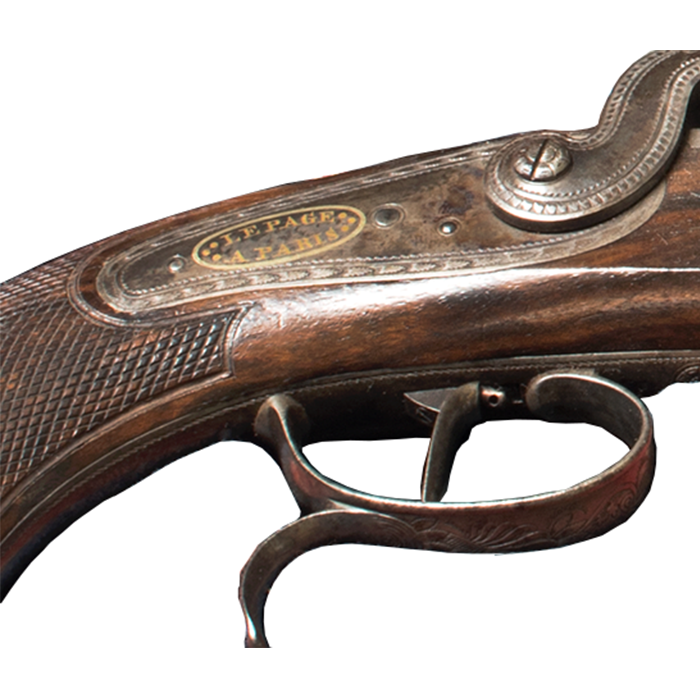 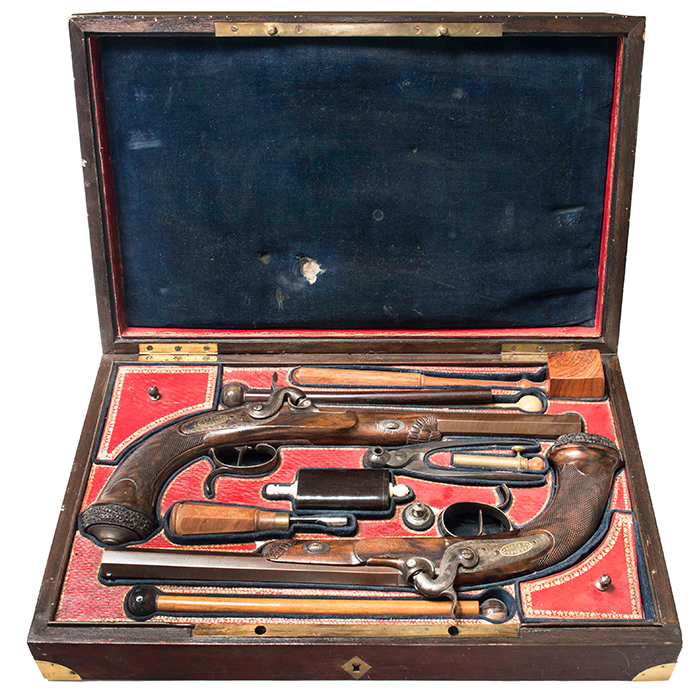 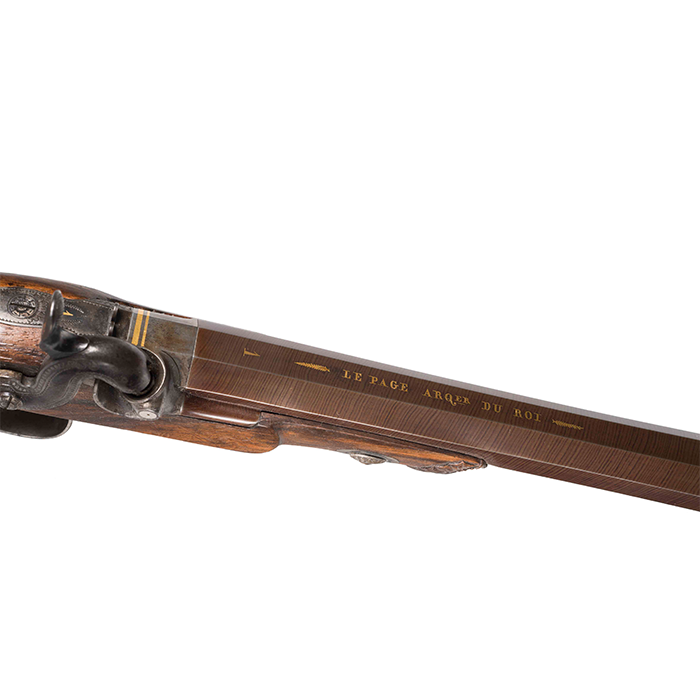 This astonishing pair of nipple plate guns is kept within a walnut wood case with all their shooting and cleaning accessories. As a duelling gun set, it was realized in the late nineteenth century at Jean André Prosper Henry Le Page’s workshop in Paris.

It was one of the most important French weapon shops and it was well known by antiquarians because of its long lasting prestige. It was founded in 1717 by Louis Pigny, who was said to be such a talented gunsmith as well as a hugely stylish man, on Rue Baillif – today Rue des Bons-Enfants – within the first arrondissement. In the 1743 approximately he sold Pierre Le Page, his apprentice since 1730 and his niece’s husband, the workshop whose name was then changed to Le Page. It quickly became an universally known trademark on weapon market because of the high quality of its products. In 1759 Pierre Le Page moved his business to Rue de Richelieu where, although some management changes, it lasted till 1929 when it closed. Jean, Pierre’s nephew, succeeded him in 1779 and Le Page trademark got such a success in the weapon field that several superb artworks were realized for Orleans family, king Louis XVI, First Consul Bonaparte, Napoleon Bonaparte and Louis XVIII. Then, in 1822, Jean André Prosper Henry, who carried out the gun case we’re analysing, followed on Jean’s wheels.

He was born in Paris in 1792. Thanks to his own talent and the fine aesthetic style he got from his father, although he had to comply with the trends at that time, Jean André was appointed royal gunsmith in 1835 as Bertonnet, Gastinne Renette and few others. Then, he was able to sign the weapons he realised with “Arq.er du Roi” acronym.

The case and the guns we’re analysing were both realised by Jean André Le Page between 1835 and 1842, when the workshop was sold to Louis Moutier. We can state that not only because of the refined way they were carried out, but also because of their nipple. Apart from being the primer Jean André mostly liked, it was Orleans family’s favorite according to the ballistic concepts at that time.

The octagonal barrels of the guns are finely refined and engraved with Le Page Arq.er du Roi golden acronym. Each breech, as well as each tang, shows the number of the gun, 1 or 2. The barrel riflings allow us to label them as shooting guns mainly, although they were employed to duel too.

Since the first two decades of the XIX century duelling was forbidden. Then, in order to realize and to sell guns like the two we’re asked to analyse, gunsmiths had to pass them off as shooting models. Rifled barrel guns were therefore more accurate than the others: that’s why they were falsely presented as shooting models, although they were employed differently. As a consequence, duels were said to be very dangerous at that time, as duellers were very likely to be shot dead.

Their leaf looking element finely adorned plates were engraved with “Le Page à Paris” golden sign. All the steel accessories were engraved with some floral patterns too. The walnut wood stocks, next to the breech, show some phytomorphic elements and their butts were shaped to get the recoil as low as possible. Both the guns are kept within a walnut wood case refined with some golden brass elements. It’s internally coated with a golden sided red leather showing some little recesses to put all the accessories – a powder carrier, some cleaning and mechanical devices, a screwdriver and an hammer looking item – into.

Such a set is well preserved and it’s an important component of Le Page workshop’s production when Jean André Prosper Henry was its leading manager.