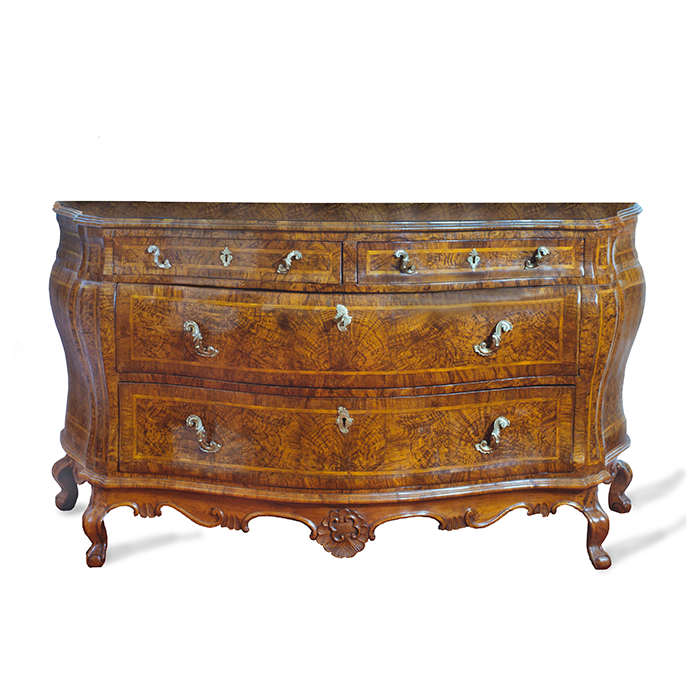 The refined chest of drawers we’re going to analyse was realized by one of the most thriving Ferrara workshops in the early eighteenth century. As strictly close to Baroque style, this period is also known as Barocchetto or late Baroque.

Strikingly rounded at its frontal and side panels, such a piece of furniture is very likely to be ordered by a local noble family. The refined inlays at its gadrooning as well as the precious wood it’s made of allow us to ascribe it to an Italian wood-carver and furniture designer.

Because of his highly tasteful artistic style, he was very likely to be from Venice. Unfortunately, we didn’t get enough information to identify him, but we can assume he lived and worked in Ferrara from 1730’s to 1750’s.

At that time, a lot of craftsmen used to move from one city to another to improve their carving skills. Once back to their hometowns, then, they opened their own workshops.

During the Late Baroque Age, most pieces of furniture were realized for customers from the richest noble families mainly. The chest of drawers we’re analysing, for instance, bears the buyer’s initials at the inside.

Two letters E are finely carved at the gadrooning. As opposite each other, they recall a cockleshell and they are encircled within a frame composed of four floral coil shaped inlays. The two letters stand for Ercole Rinaldo III d’Este (1721-1803), the Duke of Ferrara the artwork was realized for. He was also a renowned expert in home furnishings.

The precious materials the piece of furniture is made of suggest the artist was used to Venice late Baroque carving style. The briar root wood he employed can surely prove that.

As one of the rarest and most expensive materials at that time, Venetian artists used it to realise Doge’s and his attendants’ pieces of furniture. Most people from aristocracy and middle class couldn’t afford it, despite their huge wealth. The briar root wood was then one of the main distinguishing features of Venetian highest personalities’ houses.

Focusing on the artwork we’re analysing, on the one side we may assume the artist was asked to use it by one of Ferrara nobles to honour Ercole Rinaldo III D’Este.

On the other, the woodcarver could be requested to move to Ferrara, where he would later realize the piece of furniture to pay his own respects to the Duke of Ferrara.

We can however admire similar artworks at the Ca’ Rezzonico Museum in Venice.