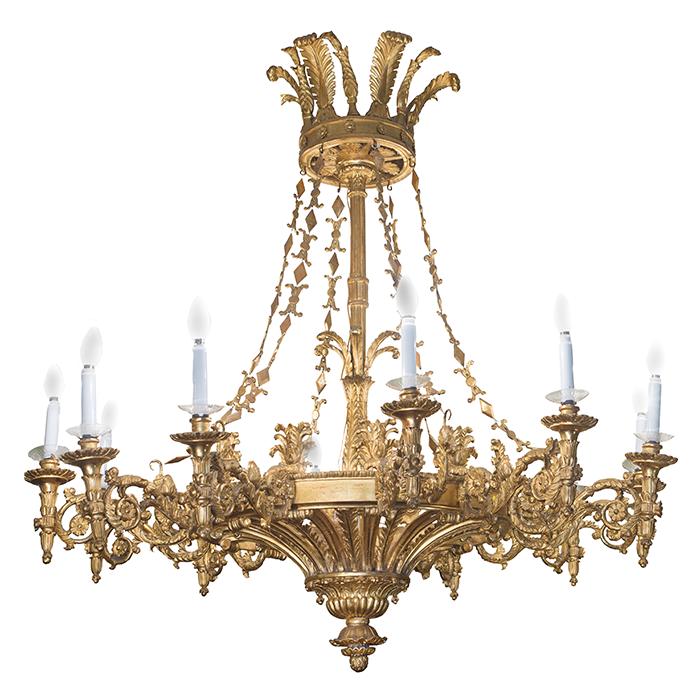 This is an astonishing twelve light golden wood chandelier from a noble Florentine family. It is composed of two parts joined together by a single carved wood shaft engraved with some floral items.

The lower part is joined with the upper one by some wooden chains engraved with geometrical items recalling needlepoint embroidered laces. Its twelve sticking out candle-holders are finely engraved as the central pine cone shaped tundish.

Because of such structural and ornamental items, we can ascribe the chandelier to Giovanni Toussaint, whose workshop was said to be one of the most important in Florence as of the mid eighteenth century.

He started working for the most important Florentine carvers and, despite his early age, he quickly stood out as a very skilled interior designer. However, thanks to his undisputed talent for wood carving, he succeeded as a fine engraver too. According to the eighteenth century main sources, he further improved his carving skills by working for the artists serving Pitti Palace, such as Liborio Bracci.

The chandelier we’re analysing is supposed to be one of the artworks Giovanni Toussaint realised for a noble Florentine customer. Those from Serristori Palace, whose finely engraved floral items are a clear example of the artist’s wood carving skills, were auctioned in 2007 at Sotheby’s in Milan.