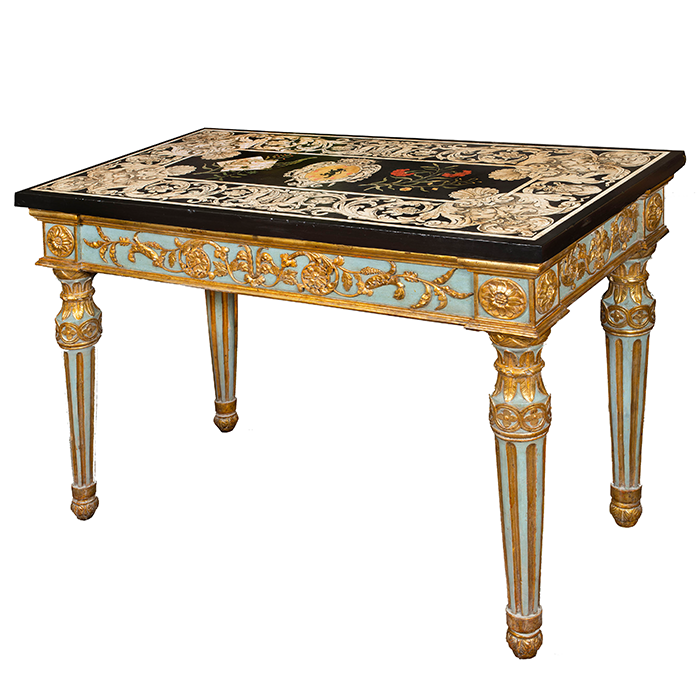 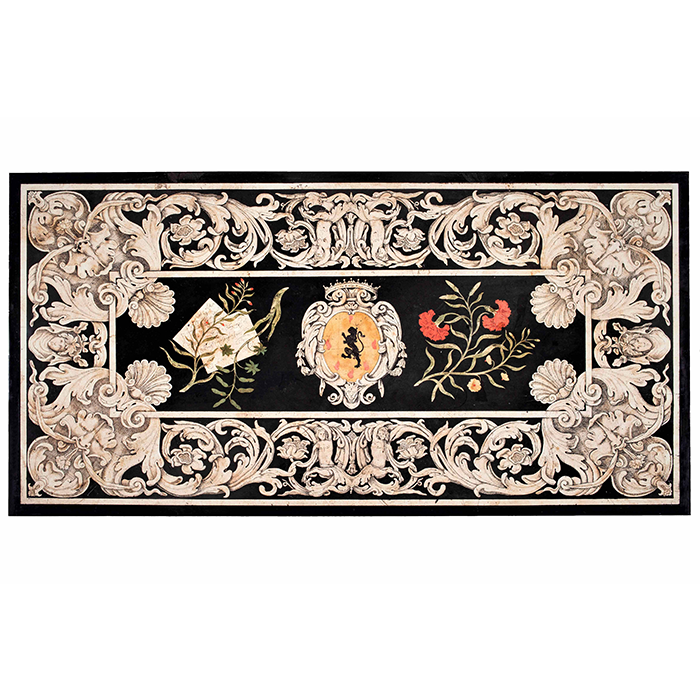 The amazing console table we’re going to analyse is made of golden wood and entirely covered with a bright blue varnish. It was realized between the seventeenth and the eighteenth centuries, as the side floral items, the corner medal shaped elements and the leg grooves can prove. Its highly balanced sizes make the table such a Neoclassical artwork as well.

Because of its contrasting colours (white and black), the scagliola lift top is meant to get separated from the other parts. Such a material became quickly popular, in the seventeenth century mainly, across the Este duchy first and in Carpi then.

The lift top recalls the seventeenth century cabinetry ivory inlays, whose ebony background was meant to enhance them. Most of the success scagliola items got over the years is thought to be connected to that as well.

In the mid seventeenth century a lot of similar wall tables were realized in Carpi. Their black and white painted lift tops were finely adorned with some floral items and mythological theme-based cartouches.

Carpi cabinet makers were then gradually borne upon by Florentine artists as a huger number of colours replaced the black and white patterns to get the artworks brighter. Some floral and animal shaped decorative elements were thought to further enhance them.

That’s why we can surely date back the lift top table we’re analysing to the mid seventeenth century, just sometime before the “Florentine artistic rule”. A lot of Carpi houses were then furnished with artworks like this. Those equipped with scagliola lift tops, similarly adorned and painted, were the most popular. The customer’s coat of arms was often at its centre as well.

Although most of the decorative items were inspired to the main painting ornamental themes, some of them get us back to the most popular lace motifs of that time. The refined way the artwork we’re analysing is inlaid can certainly prove that.

Because of its bright paints, we could compare the table to the latest fashion items although, thanks to its undeniable modern style, they could certainly get inspired by it.

Since it’s made of precious materials, we can state this artwork is surely worthy of belonging to a refined antique collector.

Its top table, finely adorned with several differently shaped items, shows Tanfani Centofanti’s coat of arms at the centre. A proud lion with six tiny flames on the sides allows us to identify one of its former owners, a renowned seventeenth century Carpi family.

We can then notice two cartouches. The first one is dedicated to Carlo Broglia (1552-1617). As Turin archbishop, he’s thought to be another of its former owners. The second one allows us to identify the artist who realized the wall table: Antonio Siena, an highly skilled Carpi wood carvers.

Well preserved, such an artwork would be then worthy of being exhibited at the most important Italian museums or enhancing one of the renowned historic buildings across our country.