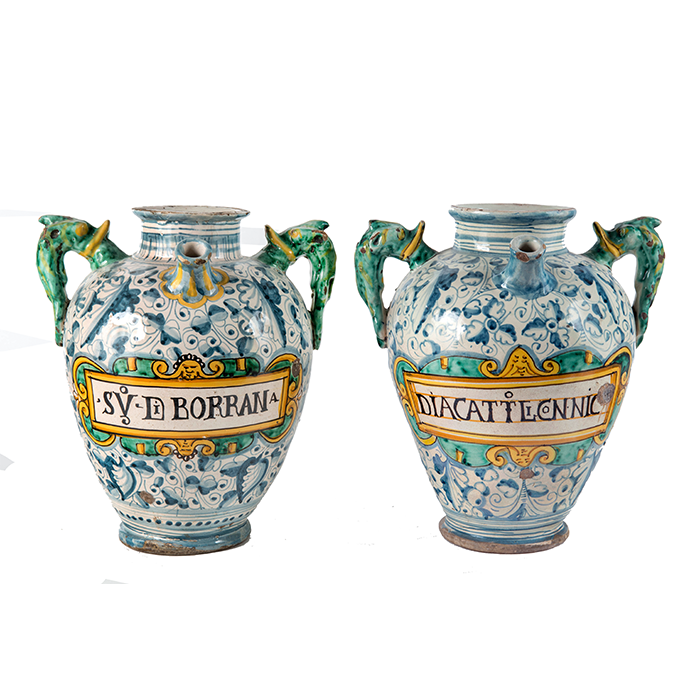 The apothecary vases we’re going to analyse were realized in the sixteenth century by one of Montelupo Fiorentino craftsmen working for Florence nobles and clergy. The pottery they employed is still today so renowned that a lot of museums would strive to get and exhibit some items made of it.

Montelupo pottery production started in the mid thirteenth century, but it rose during the Medici period to get the Tuscan town one of the main Italian pottery centres. Its apothecary vases were quickly bought by most of the Florentine chemists to set up their stores according to the latest urban standards.

As of the late fifteenth century, some huger drugstores like that close to Santa Maria Novella church, one of the most renowned throughout Italy, opened across Tuscany. Montelupo craftsmen provided most of them with their pottery vases, just like the drugstores at Santa Maria Nuova’s in Florence, Ceppo’s in Pistoia and Santa Chiara’s in Pisa.

The most important Florentine abbeys were provided with similar vases as well. Some public laboratories and drug stores opened then at San Marco’s and Santa Maria Novella’s.

Adorned with an amazing central cartouche bearing the acronyms of their contents each, both the vases we’re analysing are finely enhanced with some floral items. The cartouches and the dolphin shaped handles are green and egg yolk looking yellow painted.

Although closely similar, we can however notice they differ in the way each spout was yellow painted. That may prove they weren’t realized by the same craftsman, even if we can state both the vases are from the same workshop. The way they were moulded as well as the precious pottery they are made of certainly prove the point.