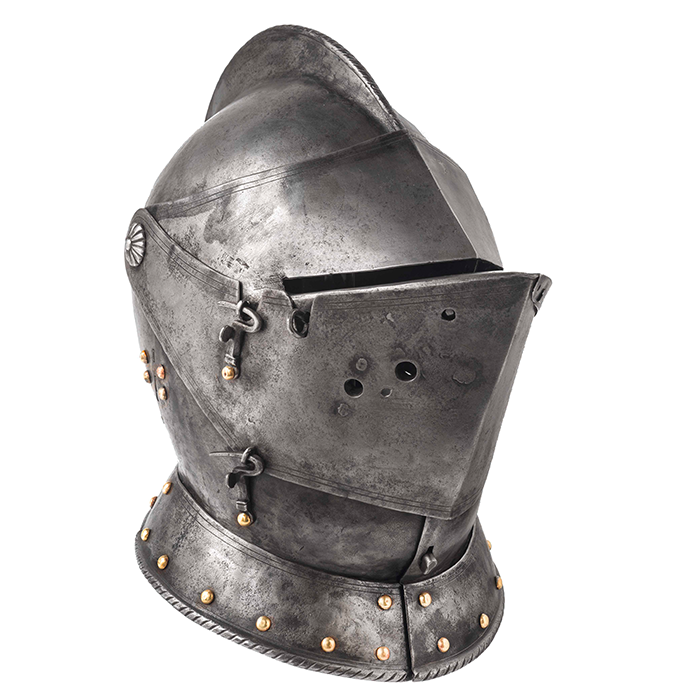 Few craftsmen only, by joining their high skills with the passion for their work, were able to forge such an artwork, as their amazing and worthy products can show. The helmet we’re analysing is one of them as well.

It’s likely to be a part of a missing armour, but unfortunately there aren’t any reliable informations about. By focusing on the iron it’s made of, we can date the helmet back to  the late sixteenth century. It was realised by some craftsmen working for some Northern Italian nobles or, more likely, for some local members of the clergy which was said to be very powerful at that time.

We can prove that by comparing the helmet to the similar ones belonging to some private collections or kept at some museums, such as the helmet at Bologna Medieval Civic Museum whose catalogue, realised by Lionello Giorgio Boccia and published by Bramante Editrice in 1991, shows it on page 7.

However, the helmet we’re analysing has several decorative golden bronze rivets. They prove the armourer paid such an attention to its main aesthetic features. Then, as every skilled craftsman, he is unlikely to have realised such an helmet without its armour. That’s why we can suppose it was commissioned by rich people only, as someone from the aristocracy for instance.