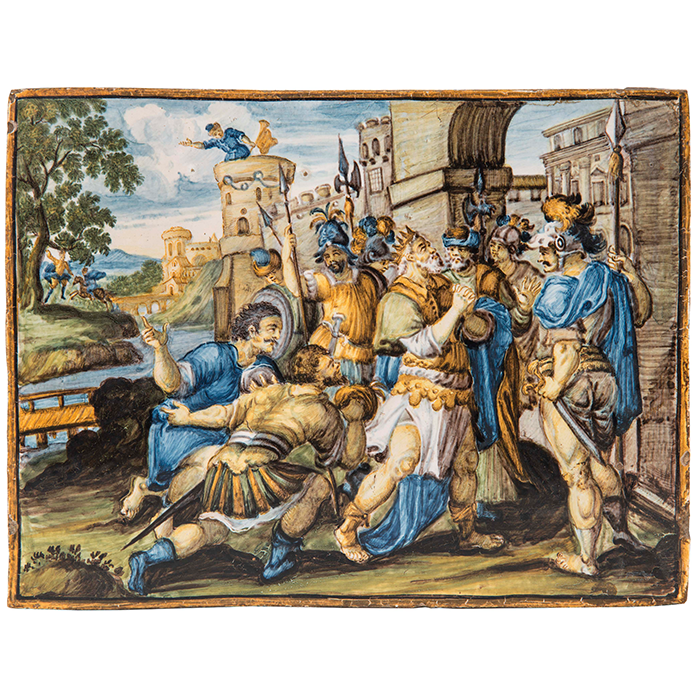 Realised by one of Abruzzo’s most renowned potters, we can ascribe the refined majolica plate we’re analysing to Castelli (Teramo district) seventeenth century production.

The majolica is a type of pottery covered in a tin/lead glaze by immersion mainly. The origin of the name is however unclear still today.

On the one side, in accordance with the Italian language, it’s thought to recall Majorca island, one of the most thriving Medieval pottery markets. On the other it’s also known as faïence: the name is said to be drawn from Faenza, another European renowned pottery centre.

Since prehistoric times, men used to mix clay with water to get it dried first and to produce several containers then. They employed them to keep and transport water mainly, such a precious resource at that time.

Once discovered, fire allowed men to realize some more resistant items. The material they were made of, the so-called terracotta, was however porous and allowed liquids to ooze. Because of that, since then men tried to get it waterproof by using some clay-alkaline claddings.

The Egyptians launched the glazing technique to get it across the Mediterranean Sea people first and all the other populations then.

The Greeks coined the term ceramica – from keramos, meaning clay or potter’s ground – standing for a more refined pottery production than the Egyptians’.

Islamic people improved it and, as of the tenth century, they got their newest techniques across the Mediterranean area. That’s why Majorca island became the most important Medieval pottery market.

Because of its high costs, several production centres quickly rose to improve two techniques, both inspired to the Islamic former ones.

On the one side pottery was covered in a lead-based glaze, on the other in a tin-based one. Although the first was also known as glazed pottery, the second got a higher success and caught on as the majolica has reached us.

Despite its thriving spread till the seventeenth century, it was then replaced by porcelain and only a few artists kept on realising pottery products. Such items were then thought to have a decorative purpose only.

Despite its very ancient origin, Castelli pottery production got success from the sixteenth to the eighteenth centuries. That was due to its precious materials, astonishing decorative motifs and the innovative way the items were realized. As not expensive, Castelli pieces of pottery caught on across the European countries, during the seventeenth century especially.

Carlo Levi compared the sixteenth century San Donato church to the Sistine Chapel because of its astonishing pieces of pottery. Along with Orsini Colonna apothecary vases, it’s thought to be the early stage of Castelli pottery production.

Some samples of its are today at Saint Petersburg Hermitage Museum: that’s meant to further prove its international importance. It’s however due not only to Castelli clay mines, mineral – such as silica – deposits and huge amount of beechwood, but also to the local pottery artists’ skills.

Antonio Lollo, the Grues and the Gentilis are certainly the most renowned. Carlo Antonio Grue made Castelli pottery production great across Europe as of the late sixteenth century. He used to decorate his artworks with mythological themes and scenes depicting austere knights mainly. His successors kept on carrying his artistic teachings on, till the early nineteenth century at least.

Drawing is the starting point of the whole pottery production. It’s then very important to the following stages, from the shaping to the glazing and decorating ones.

After drying the piece of pottery out at room temperature, firing and glazing it, the dusting technique allows the artist to bring the preliminary sketch onto, to decorate it.

Once fired and glazed, the artist paints the item in accordance with Castelli traditional colours. The so called tavolozza castellana – or Castelli palette – consists of cobalt blue, antimony yellow, ramina green, manganese brown and Castelli orange. Artists used to realize their brushes by employing some animal hairs as well.

Once decorated, they put the piece of pottery in the oven – the so called breathing oven Castelli craftsmen realized such a time ago – for the second time.

Local artists started decorating their products after Antonio Grue had dedicated himself to study landscapes in the late seventeenth century. They would then become Castelli majolica main pictorial themes.

In the following decades several renowned potters enhanced the local artistic production with some golden items. Landscapes are still today its most popular theme.

The refined rectangular plate we’re analysing stands out because of its bright glaze and its golden edges. The scene it’s decorated with is meant to recall the landscapes Antonio Grue and his apprentices used to depict.

A mythological scene, recalling the wings of a renowned theatre, is shown. In the left background some mountains enhance two knights duelling by a river along the city walls. In the foreground, next to the bridge crossing it in front of the town gate, we can appreciate the main characters.

An old king and his two servants, holding a stone the first and some straw the second, are surrounded by a group of soldiers. Roman centurion looking, the draped clothes and the plumed helms they wear, as well as their swords, get the whole scene much more dramatic.

The white-haired king pleads with them to be allowed to enter the town. It takes up the right foreground, although partially hidden behind the characters. We can appreciate the late Roman architecture elements of the town such as arches, columns, window niches and gables. They are enhanced by the Medieval battlements and watchtowers as well.

On the top of a high tower, a messenger announces with his trumpet the foreigners are going to enter the town.

In accordance with the Old Testament and the Jewish culture, gates are the symbol of power and authority on the one side, of city trades on the other. Some people, such as soldiers or just old citizens, used to stay always nearby: if the gates were shut, no one was then allowed to enter.

Greatly preserved, the majolica we’ve just analysed is certainly worthy of belonging to the most renowned art collections and museums, because of the artist’s amazing attention to detail mainly.