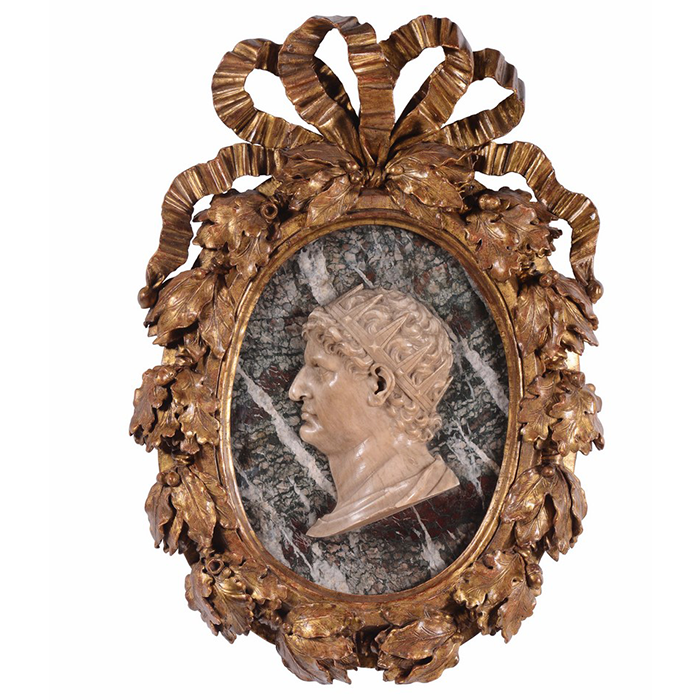 Roma, second half of the XVIII century

Within an amazing golden wooden frame, adorned with some oak and laurel leaves and a pleated woven ribbon above, the proud image of an ancient character is depicted on a black and white veined marbled plate with some dark red spots.

Because of his facial features, his wavy hair and his bright crown, he is said to be Nero, one of the most controversial and – at once – interesting characters of  Imperial Rome.

As the fifth Roman emperor from the Julio-Claudian age, Nero (37-68 A. C.), whose real name was Lucio Domizio Enobarbo, was Claudio’s stepson.

He succeeded to him in 54 A.C. and, according to some – but only partially true – common believes over time, he was involved in several plots and homicides.

The deaths of people as Agrippina, his mother, Claudia Ottavia, his first wife, and Seneca, Stoic philosopher and his preceptor, are thought to prove that.

Ruthless and always guarding against any conspiracy, Nero – getting married to Poppea first and Statilia Messalina then – was said to have set Rome on fire to destroy it, according to the main historical sources at least. Some of the earliest Christian local comunities were harshly charged with that.

After the crushing fire, he got his new court – the Domus Aurea – realised, as he was no more interested in Rome affairs, but in arts and music mainly.

After a few years, the Senate overthrew him by appointing Galba, a Roman general, as emperor.

Because of the circumstances, Nero was forced to leave Rome and repaired to the countryside where he killed himself as he had been abandoned even by his pretorian guards.

The unvarying features of his rounded face are emphasized by his thick hair with a golden radial crown above. It fits Nero’s head tightly: he was the first to put it on in place of the golden laurelled one, which had been used by all of his forefathers.

According to all the stylistic elements of its, we can date back the work to the late XVIII century Roman sculpture, as it is likely to be realised by Bartolomeo Cevaceppi (Rome, 1715/1717 – 1799).

He was well known as an expert in ancient marble restoration and because of his own copies of some Greek-Roman sculptures.

As several of his peers working in Rome and Florence at that time, he stood out especially for sculpting some ancient emperor images as well for decorating a lot of mansions and private buildings.

All these works got such a success. Several English lords, for instance, wanted him to realise, just for their own collections, some bronze or marble copies of the most popular archeological items.

A lot of English artists came to Italy to realise some similar works as well. A huge amount of them was then bought by some foreign nobles to get their houses and gardens more and more attractive.

Realised shortly before the Neoclassical trend caught on as of the late 1700, the sculpture joins elegantly the ancient art with the Rocaille style.

That’s shown not only by the artist’s attention to realise the emperor’s profile starting from an ancient coin, but also by the chromatic effects resulting from the veined marble plate in combination with the sumptuous golden frame.