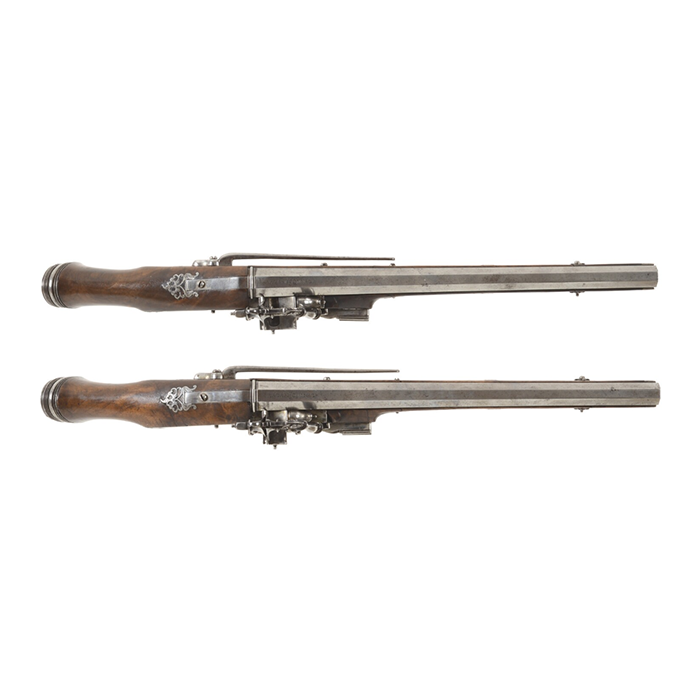 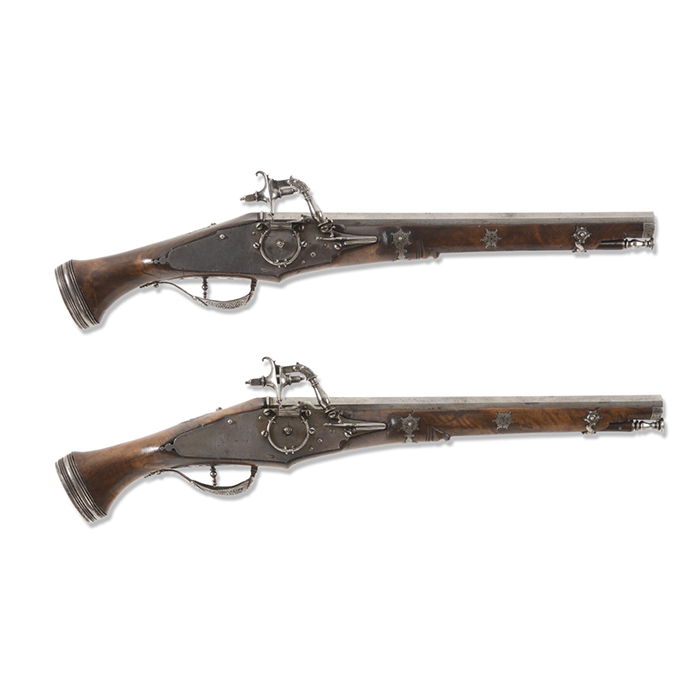 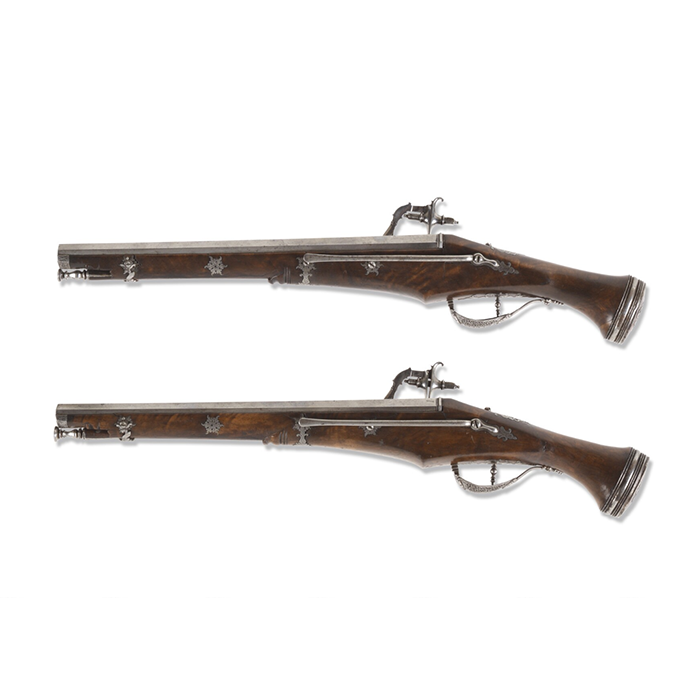 Both the refined wheel lock pistols we’re going to analyse were realised by one of Brescia’s most skilful gunsmiths in the late sixteenth century.

Created for Holy Roman Empire’s heavy cavalries – such as the German, Italian and Burgundian ones – in the earliest sixteenth century, the wheel lock replaced the matchlock mechanism as it was simpler and safer to use.

If compared to the latest firearms, the earliest ones were much heavier and harder to carry along, as the 50 cm long pistols we’re analysing can certainly prove.

The ignition mechanism they are equipped with is composed of a knurled iron wheel. It’s hinged on an axle joined to the catch and the dog springs. We must rotate it 270 degrees with a specific key – like the one belonging to our collection – to load the mechanism.

We have then to spin the iron wheel against a piece of pyrite, usually made of iron disulphide and clamped in the cock jaws the trigger is composed of.

This produces some sparks firing the primino powder we previously put into the pan. It is joined with the barrel, we must load with some black powder and bullets, by a narrow touchhole. The sparks get then through it to fire the powder resulting in the gunshot.

Unfortunately, we don’t have enough information to exactly prove when, in the early sixteenth century, wheel lock firearms caught on first. This is mainly due to three contrasting sources.

Leonardo da Vinci drew the mechanism in the sixteenth century, as his Codice Atlantico can prove. Alfonso I D’Este forbade his soldiers from using wheel lock harquebuses in 1513 and 1522. A Nuremberg’s clockmaker was then said to create such an ignition device in 1517.

Since it got such a success, most of the European gunsmiths started providing harquebuses and rifles with the wheel lock mechanism, in addition to the pistols, despite their higher production costs. That’s why, however, gunsmiths kept on realising handguns mostly.

Only in the late seventeenth century, when the flintlock would completely replace the wheel lock mechanism, rifle and pistol productions would then be the same.

In Northern Italy, Brescia was such a renowned firearm production centre at that time because of its large number of skilled gunsmiths. Both the pistols we’re analysing were realized there as well.

Equipped with octagonal barrels, bearing Lazari Cominaz signature each, they are endowed with a ferrule at the breech. The lock plates are finely grooved, just like the wheel case.

The finely embossed hammers are enhanced with acanthus leaf shaped items and the central part of the iron mountings are decorated with cherub looking elements. The trigger guards and ferrules are skilfully threaded and adorned with floral shaped drilled items at the lower parts.

Both the pistols are provided with their sticks as well as the belt clips at the bottom. G.F.R. sign – for further information about it please see Nolfo di Carpegna’s The Brescian firearms, p. 68 –  is inlaid on the inside surfaces of the locks.