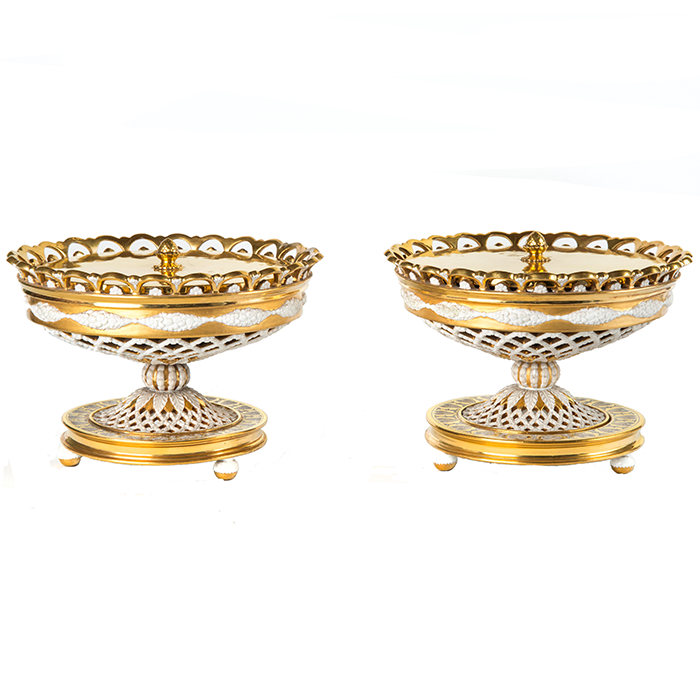 Such a pair of refined white pottery French risers showing some golden decorative items were realized in the earliest nineteenth century. They belonged to the set Elisa Bonaparte is likely to have awarded a noble Florentine family.

In 1810, according to Napoleon’s political strategy, Europe was dramatically turned upside down as French supremacy branched out its 1789 borders. The other nations had then to get allied with or subjugated by the French Emperor.

Despite the Viceroy Eugenio De Beauharnais, the son Napoleon wife (Giuseppina) had from her first marriage,  Napoleon ruled over Italy. Felice Baciocchi was charged with the government of Lucca and Piombino Princedom, but Napoleon and his sister, Elisa, ruled over it. From 1809 she was also appointed as Grand Duchess of Tuscany and she moved to Florence.

Certainly worthy of note, such a pair of risers could be kept at some of the most important museums, although they could belong to the most renowned art collections in the world as well. Each of the artworks has three golden spherical feet whose upper parts are covered with a white pottery garland each.

A two-centimetre-thick golden edged surface leans against the feet. Its external part is finely enhanced by some tiny white glazed items crossing each other. Some of them are floral/heart shaped and are meant to recall a little owl. Some others look like a candle holder covered with leaf looking decorative items.

The inner part of the surface shows a golden tight mesh net looking item. It’s composed of some tiny filaments crossing each other and covered with some white pottery leaves at its central part.

The round surface and the cup are joined together by a refined rounded stem with some golden and pottery vertical alternating stripes. The lower part of the cup is finely adorned with a large mesh net with some floral elements at its intersections. Like the one at the round surface, it’s been skilfully realised and closely recalls some white lace embroideries.

Each of them is meant to get the riser lighter and airier, when it is full of fruit or candies especially, in addition to improve its white and golden sparkle.

A Greek fret sticks out of the golden edged cup. It’s composed of several interconnected pottery items depicting a huge variety of flowers and fruits, just like grape leaves and pomegranates. In addition to recall the main purpose of the riser, such decorative items are meant to suggest Greek and Roman festoons as well.

A lace looking golden drilled garland runs all over the fret. It’s likely to be meant to prevent any candies from getting out. It’s finely enhanced with some white decorative items and the tiny golden flowers each half circle the garland is composed of shows at its centre. The riser, because of such decorations, recalls the sugary icing layers cakes are usually covered by.

A thick golden pottery lid, whose smooth and bright surface has a tiny golden pine cone at its centre, gets the whole artwork hugely enhanced.

Greatly preserved, both the risers are such an example of the artist’s skills as all the decorative items blend finely together.