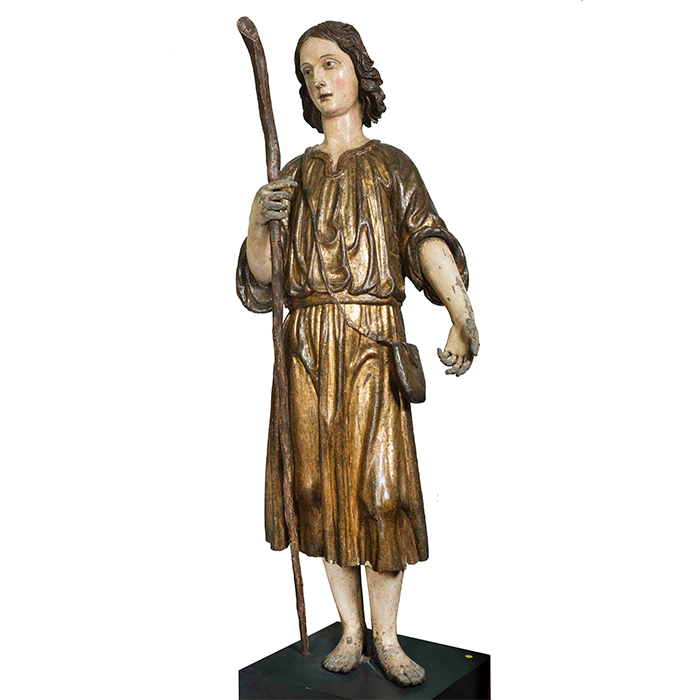 As made of gilded polychrome wood, the Pilgrim sculpture may be connected to the mid fourteenth century Siena School, especially if compared to Agostino di Giovanni’s wooden artwork which is likely to be dated back to 1338 approximately, the same year of his alleged death.

However, according to its structure, we’d better date the Pilgrim sculpture to the early fifteenth century. We can prove that by comparing it with some wooden works realised in the same period, which were unanimously ascribed to Domenico Di Niccolò.

Better known as Domenico Dei Cori because he carried out the inlaid choirs of some Siena churchs, as the magnificient one within the inner chapel at Siena Town Hall, he was born in 1363 approximately and he is said to die in 1453.

In the early firteenth century, therefore, Francesco Di Valdambrino (1380 – 1426, approximately), an expert wood sculptor, worked in Siena. By a stylistic point of view his artworks are very similar to Di Niccolò’s ones and to his Pilgrim especially. However, as they were close friends, such an artistic affinity doesn’t prevent us from ascribing the sculpture we’re analysing to Di Niccolò himself.