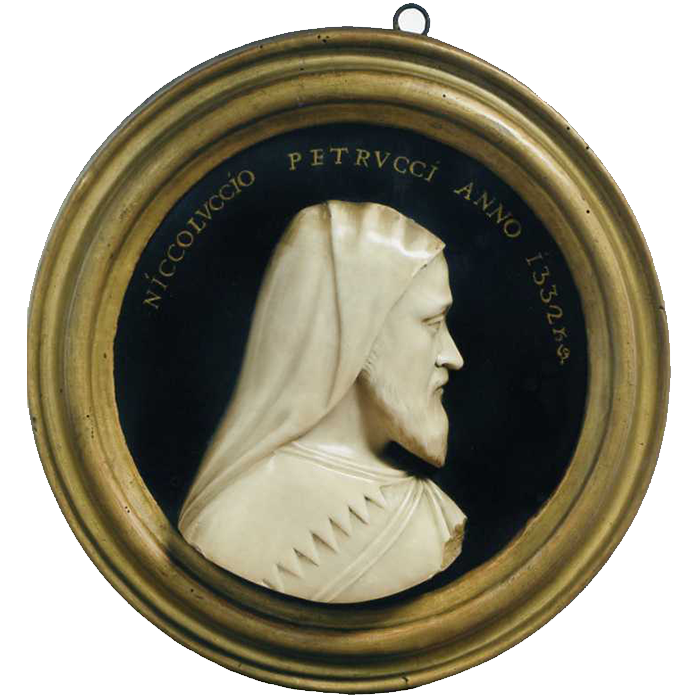 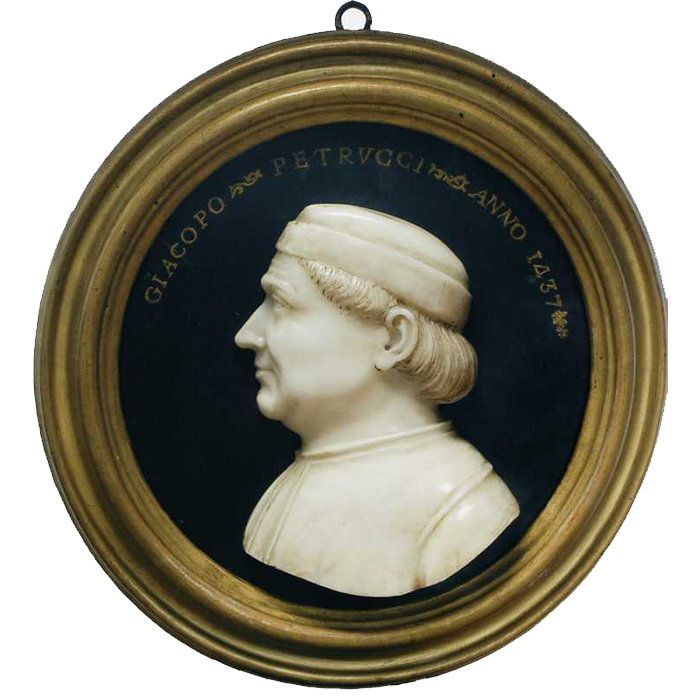 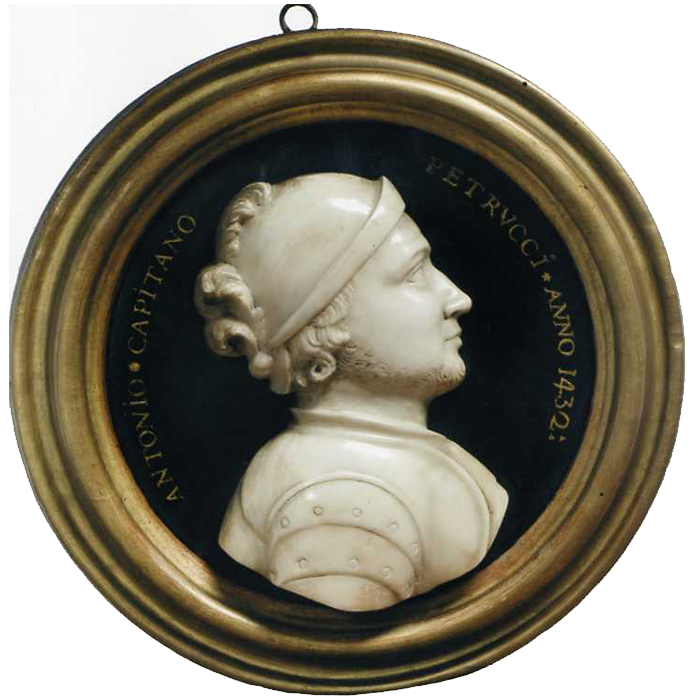 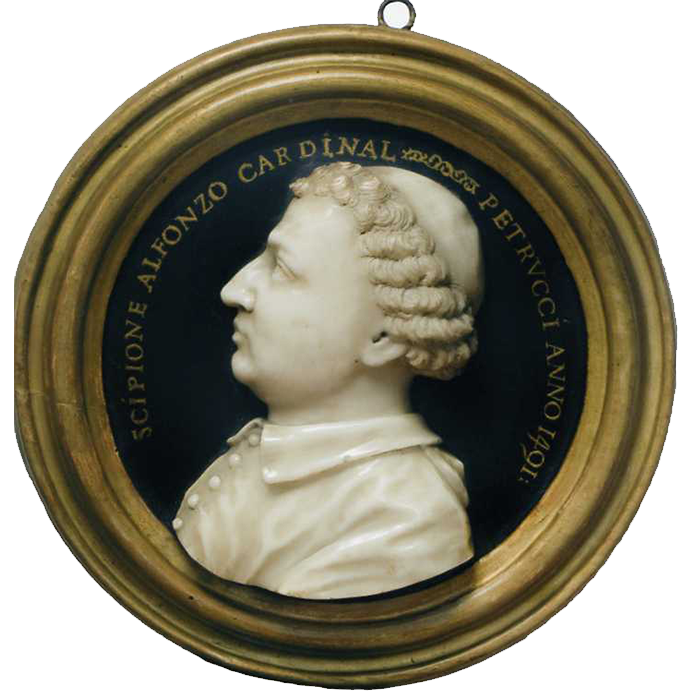 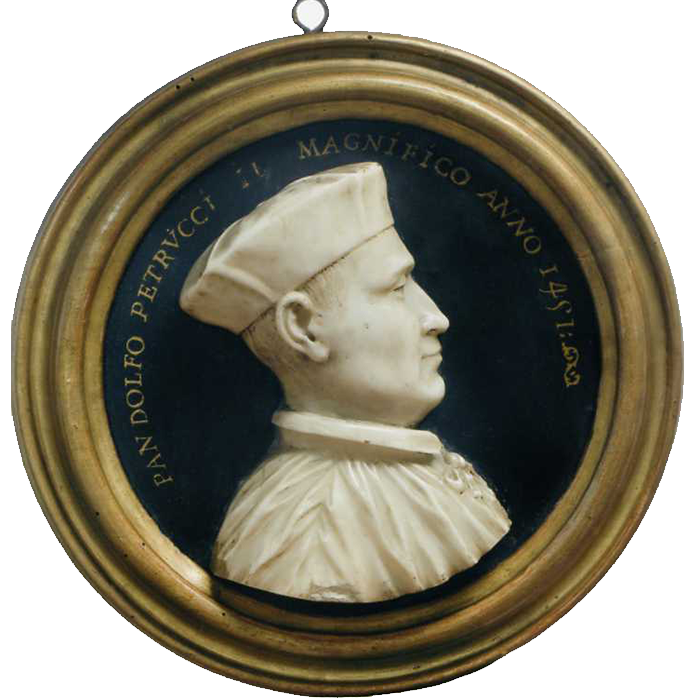 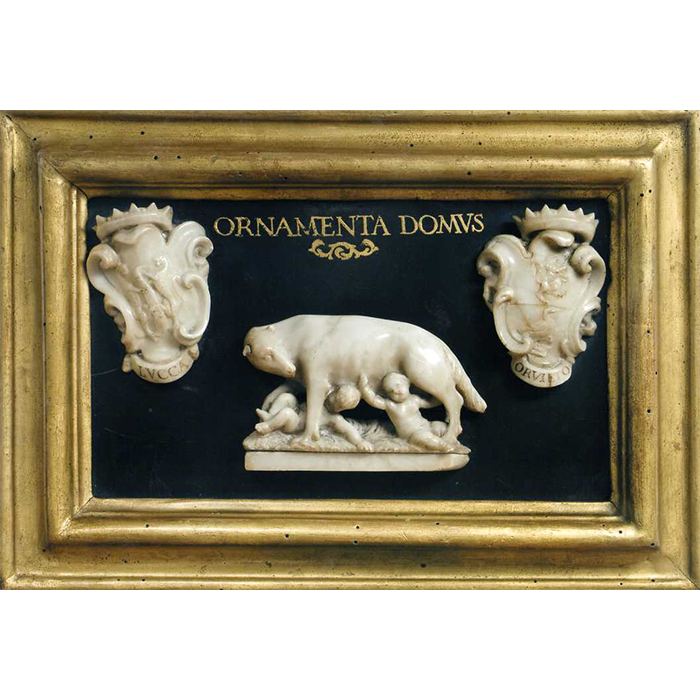 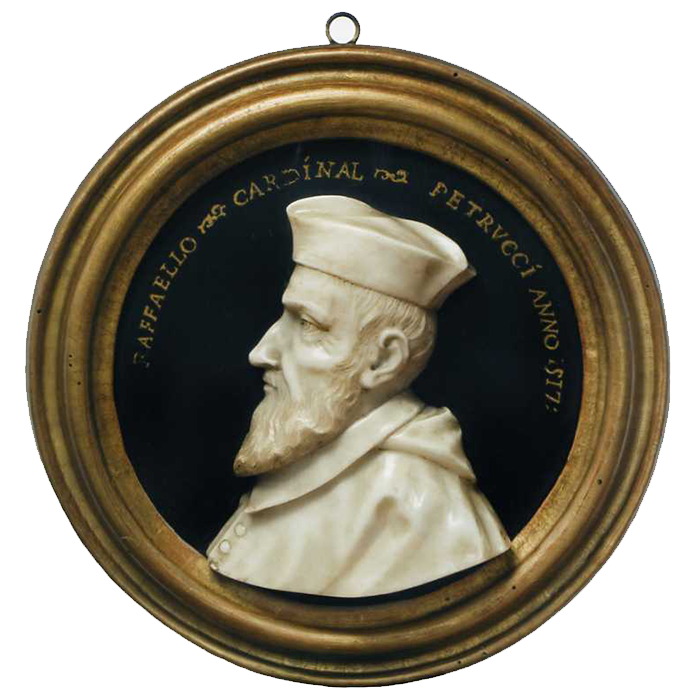 These Baroque sculptures, each with its original golden wooden frame, are such examples of the artworks some aristocratic Tuscan families wanted to be realised to honour their dear ones. Because of their engraved frames, we went back to Petrucci family, one of the most important fifteenth and sixteenth century dynasties in Siena. It owes its name to Niccoluccio Di Petruccio, Biccherna official in 1340: the first evidences of the family date back to the end of the thirteenth century, however. It improved its prestige thanks to Pandolfo – lord of Siena in 1499, better known as “il Magnifico”, which died in 1512 – and his nephew, Raffaello, an important sixteenth century cardinal. As in 1799 Giuseppe Petrucci, Siena archdeacon, appointed Celso Domenico Di Girolamo Barbagli his only heir, Petrucci family changed its name to Petrucci Barbagli.

Niccoluccio medal partially shows his family’s coats of arms, originally composed of golden and blue items with a black eagle on it.

Since they were realized to honour Petrucci family’s members, all the artworks are very likely to be carried out in the mid eighteenth century, as their plain golden frames may prove. Since they were realized according to Baroque style, it wasn’t easy to date them. However, some structural details allow us to ascribe them to Antonio Montauti, one of the most important late Baroque Tuscan sculptors.

He was born in 1683 as Giovanni Antonio and he owes his artistic training to Giuseppe Piamontini, whose stylistic techniques he quickly got as he had been allowed to join his Florence workshop. In 1706, shortly after attending Art and Drawing Academy in Florence, he left Piamontini’s workshop and realised a huge amount of artworks, sculpted medals mainly.

Montauti carried out several sculptures, each of different size as well as composed of a specific material, at Medici family court. Then, between 1715 and 1718, he realised some astonishing engraved medals for the church of San Firenze complex, the same worship Giovacchino Fortini carried out similar artworks for.

After getting Santa Maria Maddalena de’ Pazzi marble sculpture done in 1723 – it was then placed within a chapel at Seminario Maggiore del Castello – he left Florence. In 1733 he settled in Rome where, in 1735, he started working as architect at the “Reverenda Fabbrica di San Pietro”, the permanent committee Pope Clement VII had appointed in 1523 to build and manage the worship itself.

Except for some travels to Florence, in 1746 he died in Rome where he stood out not only as architect, but also as sculptor, bronze-worker and decorative designer (for further informations, please see G. Rocchi Coopman de Yoldi (a cura di), Arte e Storia nella Basilica Vaticana, 1996, pp. 371-377 and S. Bellesi, Montauti Antonio, in Dizionario Biografico degli Italiani, 2013, Il Mulino, Bologna).   .

The medals we’re analysing are very similar to some other Montauti’s artworks, as the four round plaster ones, each with a frame made of the same material. Showing Marsilio Ficino, Niccolò Machiavelli, Michelangelo Buonarroti and Galileo Galilei, they are kept at Bacarelli Gallery in Florence (see S. Bellesi, Incontri. Sculture e Oggetti d’Arte in Galleria, Firenze, Galleria Bacarelli, 2007, pp. 25-27). Although more anatomically defined, their characters are very similar to the ones of the medals we’re asked to analyse because of their Neo-Renaissance style. Not only Montauti’s late artworks, but also Girolamo Ticciati’s marble sculptures – which are today kept at Rinuccini palace in Florence – can prove that.