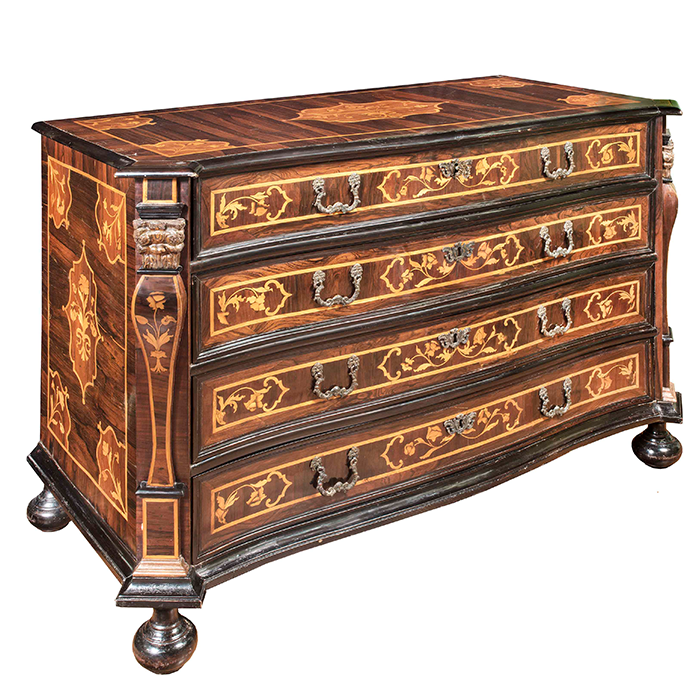 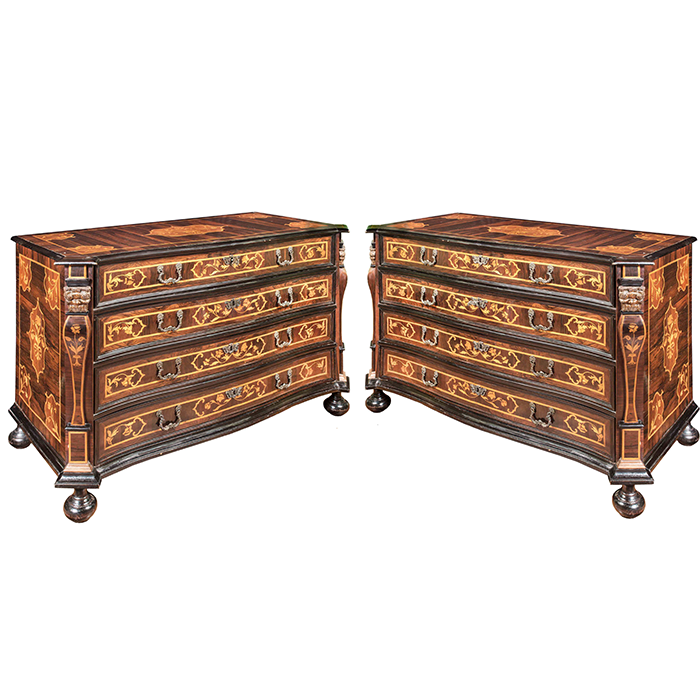 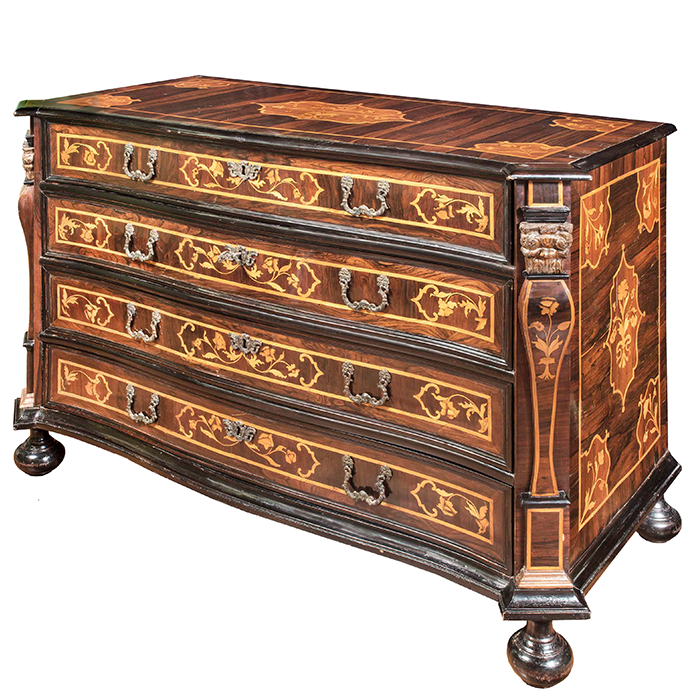 Pair of chests of drawers

Pair of precious antique rosewood veneered chests of drawers. The two specimens are inlaid with various timber species which came from the flourishing and rich Italian capital city of the Eighteenth century. The Seventeenth-century Roman cabinet-making has had numerous models of dressers. When talking about the Eighteenth-century Roman furniture, it is inevitable to identify characteristics such as uniqueness and originality. The front of these two specimens is divided into four drawers and it is also slightly curved just as its sides. The protruding edges are characterised by a groove just below the top, which makes them to take the form of a curved lesene with capitals and dice at the two ends. The bottom of the dressers ends in continuity with two bowl-shaped toes. The particular preference for pilasters, columns and curved lesene used to protect the corners can be considered typically Roman. This type of curved lesene is a distinctive feature of the Roman cabinet-making style, for it is usually applied on dressers, trumeaux and ribal (inlaid or not) indeed. The top is in line with the rest of the dresser. A black frame runs on the edges that recalls the one which runs along the base. Among the various stylistic details, you can define the inlay as a unifying characteristic of a certain kind of Roman furniture throughout the Eighteenth-century. The peculiarity consists not so much in the type of the inlay, as in its layout; it is in fact a characteristic of Roman cabinet-making to apply the inlay at the ends or at the corners of a surface. This pair of chests of drawers is emblematic in its way: the front of each drawer has two specular inlays, and a central one. All the inlays are made of timber species such as “angelino wood”, bois de rose and bois de violette, which are lighter than the rosewood used to veneer these two pieces of furniture. The top and the sides are designed with similar characteristics, such as similar inlays which are placed at the corners of squared frames, along with the central medallion. The supporting frame of the Roman furniture is usually made of both poplar and fir. As for the veneer, both rosewood and walnut are widely applied with the grain arranged vertically. The lighter timber is characteristic of the Roman cabinet-making, which is used to create contrasting inlays and frames. The above-mentioned timber species “angelino wood”, it is nothing but a variety of maple; generally inlays are made of timber from fruit trees. The kind of keyhole of these dressers is typical of the Roman cabinet-making and it is called “ad ali di pipistrello” (lit. “bat-winged”) due to its shape, which reminds the spread wings of a bat. Keyholes and handles are made of bronze. Generally, this kind of masterpieces from Rome were made for the papal aristocracy. They are very rare and their value goes beyond the local market. The fact that it is not a single chest of drawers, but a couple, gives even more value to these specimens, making them worthy of being part of the most prestigious private collections or to be housed in national and international museums. The state of preservation is very good.