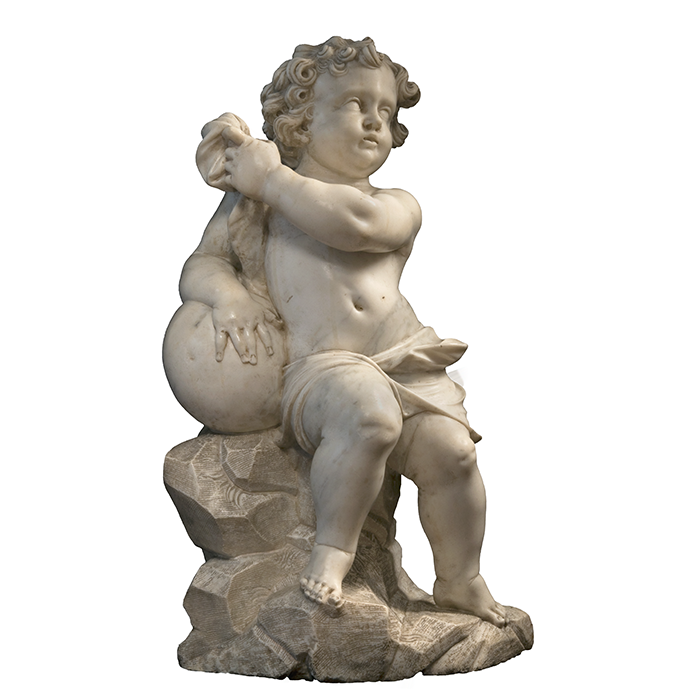 Christ as a child

St. Joseph the Baptist as a child

Giuseppe Piamontini finely sculpted the characters of the artworks we’re analysing. Both Jesus and Saint Joseph the Baptist are sitting on a rocky sharp-edged surface.

Joseph, one of the most renowned Jesus’ ministers, has been depicted according to the traditional iconography. Looking like an humble and contemplative child, he wears a rough goatskin tunic and he sits next to a lamb. Such a tiny innocent animal is meant to recall the Agnus Dei, the symbol of the Christ.

Frontally portrayed, Jesus’ left hand is holding the upper part of the cloth getting off his right shoulder. His right hand leans against a sphere representing the Earth. As the Saviour and the Redeemer, he turns mercifully towards people looking at him to get their attention and to convey God’s own message to them.

Both the sculptures, whose origin has been unknown so far, result from such a refined synergy between the seventeenth century Roman and Tuscan artistic trends.

On the one side, the two artworks highly recall Bernini and Alghardi’s schools, as they were some of most renowned Roman artists at that time. By a strictly pictorial point of view, we can therefore appreciate several similarities with Giovanni Buratti’s Sant’Agnese portata al martirio at Sant’Agnese in Agone church and Antonio Giorgetti’s Monumento funebre a Luca Holstenius at Santa Maria dell’Anima church in Rome (for further informations, please see A. Bacchi, Scultura del ‘600 a Roma, Milano, 1996, figg. 242 and 425).

On the other side, both the sculptures recall the Baroque artworks realized in Tuscany after Grand Duke Cosimo III had established Medici Academy (Rome, 1670), whose direction and management Ciro Ferri and Ercole Ferrara were charged with. Both the sculptures are then meant to celebrate Jesus allegedly meeting up with the Baptist. Worshipping John as a child (better known as “San Giovannino”) votive items was therefore such a tradition among Tuscan devotees.

By focusing on Medici Academy earliest students, two of them – as they succeeded among the Roman sculptors – bore upon the artworks we’re analysing mainly: Giovan Battista Foggini and Carlo Marcellini. The first played however the more important role in supporting Giuseppe Piamontini, whose early artistic production both the sculptures can be ascribed to.

He was born in 1663 in Florence. He was introduced to art studies since his childhood by some – unfortunately unknown till today – apprentices of Foggini’s.

He then moved to Rome where he attended Medici Academy from 1681 to 1686. As he came back to Florence, because of his several artworks, Piamontini shortly became one of the most renowned Tuscan artists in the middle of the Baroque age. Thanks to his fine artistic skills, he was asked to work for the most important Florentine families as well as to adorn the main religious buildings of the Tuscan capital.

Supported by Ferdinando de’ Medici – the Tuscan Grand Duke he realised some of his most astonishing marble and bronze artworks for – Piamontini, in accordance to Foggini’s teachings, carried out several Classic Roman school style sculptures. Some of them however, in addition to Alghardi’s distinctive features, highly recall the French nouvelle vague.

As one of the most renowned Tuscan sculptors between the seventeenth and the eighteenth centuries, Giuseppe Piamontini died in Florence in 1744.

Thanks to some documents (Biellesi, op. cit., p. 34, note n. 7) we discovered at Florence State Archives, we can prove the two artworks we’re analysing were realized by Piamontini.

Although the two payments were at first said to be connected with the same artwork, we can today state each of them was linked to one sculpture only.

Because of the terms “group” – allegedly standing for two or more items – and “putto” (winged cherub, A/N) – we noticed twice by reading the artist’s biography – we can prove Gabburri surely referred to the artworks we’re analysing.

We can therefore maintain they belong to Piamontini’s earliest artistic production as the two characters are different in visual and stylistic definition, in addition to their lacking plastic smoothness. The two sculptures are very likely to be realized in 1680 approximately, before the artists moved to Rome. By conveying Piamontini’s finely eclectic style, Foggini and Marcellini’s late Baroque productions bore upon both of them.

We can compare his sculptures with two other artworks as well. On the one side, Apoteosi di Sant’Andrea Corsini painting (1679) within Corsini chapel at Santa Maria del Carmine church.

We can get a further proof of our assessment by comparing the two sculptures we’re analysing to the artworks Piamontini realized before he moved to Rome: the Saint Joseph the Baptist at Florence Baptistery and the Actaeon at Heim Gallery in London. We can appreciate the main similarities by focusing on Actaeon’s clothes especially (see J. Montagu, Some small sculptures,1974, p. 4, fig. 2 and Repertorio, op. cit., 1993, III, fig. 430).