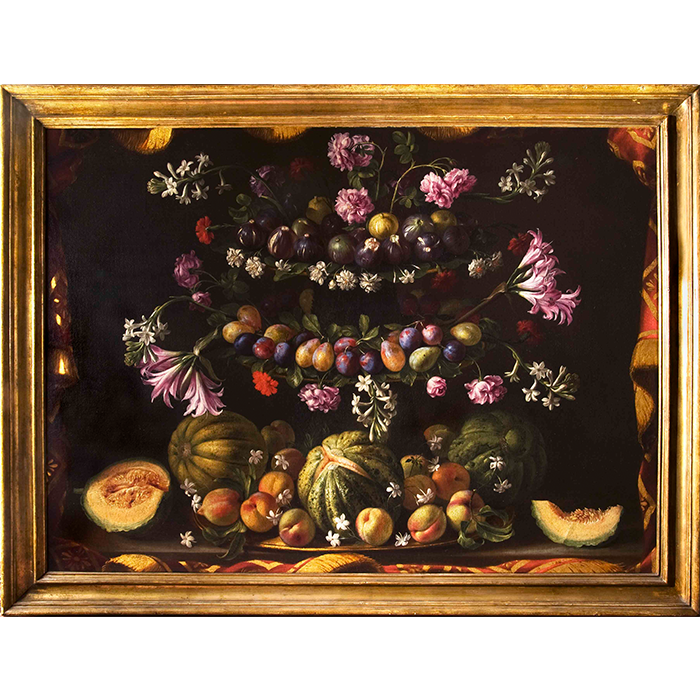 Still life with some fruit in a copper bowl

Still life with some fruit and risen flowers

Although only some pictures of them have been known so far, according to Maria Silvia Proni both the paintings were very likely to belong to Rospigliosi’s. The 26 June 1713 family artwork inventories can prove that (for further information please see A. Negro, La Collezione Rospigliosi. La quadreria e la committenza artistica di una famiglia patrizia a Roma nel Sei e Settecento, 1999, pp. 315 and 317).

Despite the huge reliability of these documents, we can further prove the authenticity of the artworks we’re analysing by focusing on a detail especially. The diamond shaped inlay on the copper bowl recalls Rospigliosi’s coat of arms.

According to the Roman family’s documents we can date back to 26 November 1644, Giovanni Stanchi is said to have realised the greater part of the flowers (“la maggior parte dei fiori”, according to Negro, op. cit. 1999, p. 71 nota 87).

However, Rospigliosi’s following sources didn’t specify who carried out them. Since Giovanni Stanchi had two brothers, two renowned painters just like him, it’s very difficult to exactly ascribe all the pictures belonging to Rospiglioni’s. Silvia Proni then referred to another publication of hers (Proni, op. cit., 2005) and she stated only the Flemish style strictly looking paintings – which we can date back to the 1640’s – were to be ascribed to Giovanni Stanchi.

By a stylistic point of view, we can then put both the artworks down to Giovanni’s adulthood production, when he worked with Niccolò, his brother. However, because of the austere spatial perspective and the way all the pictorial elements were set on the canvas, Giovanni is more likely to have realized both the paintings on his own. Each of Caravaggio’s style looking visual devices as well as all the elements recalling the Baroque age may prove that. Following Daniel Seghers’ and Battista Crescenzi’s main teachings, Giovanni’s artistic ties to the Flemish and Caravaggio painting were closer than Nuzzi’s and Cerquozzi’s, two of the most important Roman artists in the mid seventeenth century.

According to Baroque style, everyday objects are meant to turn into something amazing. Plants, fruits and groceries then belong to a sort of luxury realism (“realismo di lusso” according to Proni, op. cit., 2005, p. 280). Those of Stanchi’s canvasses are hugely enhanced by the refined carpets the artist and his brothers used to depict to enhance their paintings. They are intended to let people “entering” the artworks not only to admire, but also to get in touch with all their pictorial items.

In conclusion, because of all the details we’ve just analysed, we can state both the paintings were realized by Giovanni Stanchi. We’d like to thank Maria Silvia Proni and Andrea G. De Marchi for their contribution to prove the artist’s pictures authenticity.