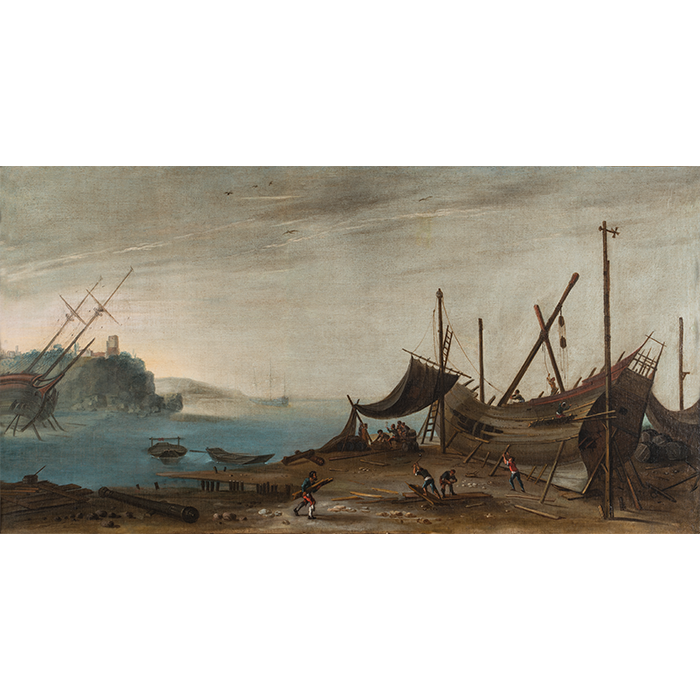 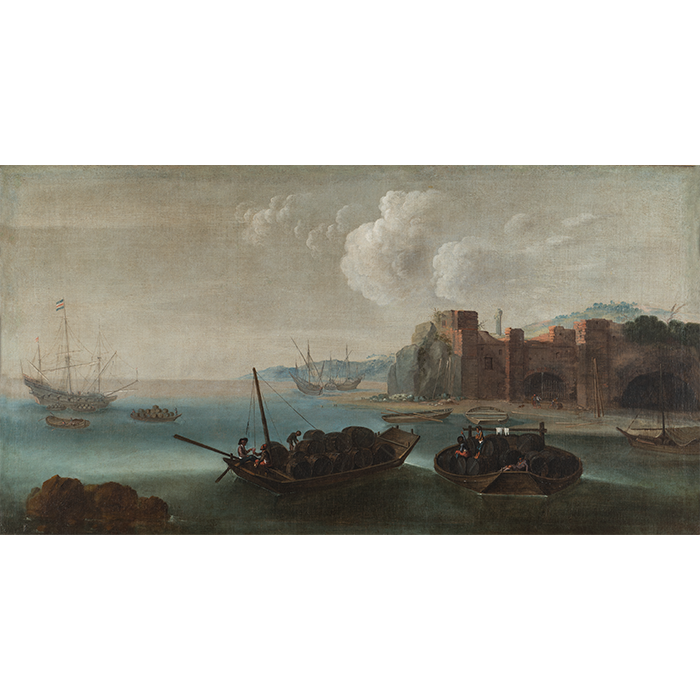 Seascape with some ships and workers

Seascape with some ships and workers

The refined lyricism of both the greatly preserved paintings we’re analysing resulted in their pleasant backgrounds we may feast our sights on. Both the shorelines are hugely enhanced by faded white skies and bright seawaters some docked ships float on, close to some dreamlike capes.

A softly low light emphasizes the scenes whose main characters look to be pictorially embedded in the foreground, just as they struck a pose. The fine way they were depicted, as well as the glazed paints the artist used, are meant to highly improve them.

We can then appreciate how the artist carefully painted the water shading into the foggy capes, whose tops are finely joined with white skies. Some seagulls are flying in that one of the first painting as well.

Because of all the visual details, the skilfully harmonised paints and the refined way all the characters were painted we can surely ascribe both the pictures to Agostino Tassi. He was one of the most renowned Italian landscape painters in the early seventeenth century.

Born in Ponzano Romano in 1580 approximately, he early moved to Rome where he was steered towards painting to depict factories and one-horse towns thanks to his skills (“disegnare di suo talento…fabbriche e paesi”, according to G.B. Passeri, Vite de’ pittori, scultori e architetti, Roma, 1673, edited by J. Hess, Leipzig-Wien, 1934, p. 117).

Tassi then moved to Florence in 1595 where he improved his artistic training thanks to Giulio Parigi. Supported by him, he focused on prospective studies and seascape painting as well.

He then got closer to Remigio Cantagallina and Pietro Ciafferi, two renowned Tuscan painters.

He moved to Genoa in 1610, but sometime later he would come back to Rome to work with Ludovico Cardi, better known as Cigoli. Along with Orazio Riminaldi, a very skilled painter, Tassi then realized several prospective pictures from 1611. Some of them were kept at Scipione Borghese’s Casino delle Muse (today Pallavicini Rospigliosi building).

He also carried out a lot of amazing seascape paintings, in addition to the ones he adorned some Roman buildings with, like Villa Ludovisi, Chigi Odescalchi and Doria Pamphilj palaces.

Focusing on the way both the scenes were depicted, we can assume the paintings were realized by Tassi during his adulthood, in the mid 1630’s approximately.

We can prove that by comparing the seascape paintings at Doria Pamphilj palace (1635) with Seascape with seamen pulling nets picture belonging to a Milan private collection (for further information, please see T. Pugliatti, Agostino Tassi tra conformismo e libertà, Roma, 1977, pp. 57, 67-69, 120 and tabs n. 107-116, 169). The pictorial layouts, the pale chromatic effects and the mystic quiet of the scenes – whose foregrounds are mainly taken up by different kinds of ships – are meant to strictly recall the painting we’re analysing.