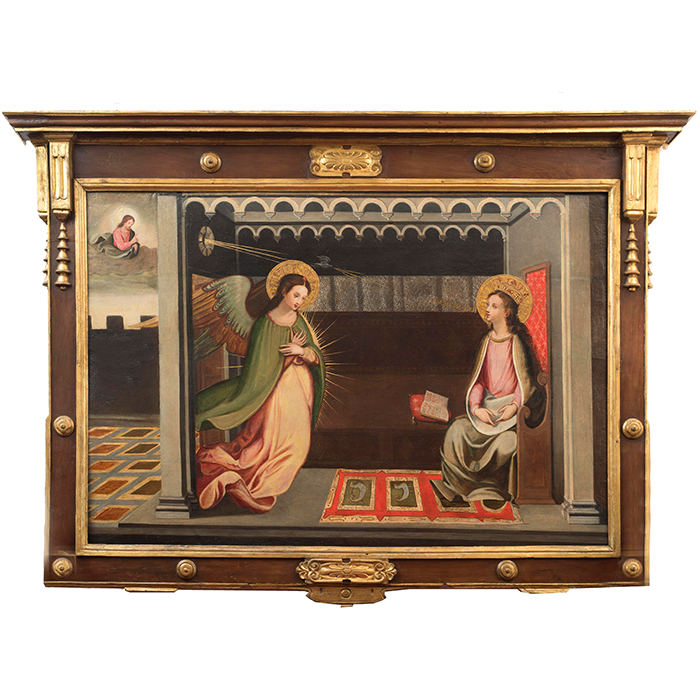 Properly preserved, the painting shows a tiny domestic room close to a balcony tiled with dark and mahogany tiles and a crenellated railing. It emphasizes the Annunciation scene, when the Archangel Gabriel was sent to Earth to announce to Mary the Son Of God’s upcoming embodiment within her womb.

If we analyse the painting carefully, the two characters result in such an original reinterpretation of a popular fresco which is said to be from the Scuola dell’Orcagna. It is now properly kept at Santissima Annunziata abbey in Florence as well.

The ancient fresco, which was said to be miraculous as realised by a “divine hand” according to the tradition, was idolized throughout the past centuries. It inspired a lot of artists to realise their works to honour itself as a whole or its two main characters, the Angel and the Virgin. Because of their sacred and pious humility, they were admired especially during the Counter-reformation age. Between the end of 1500 and early 1600 they also were the main iconographic elements of several paintings realised by some well known artists such as Carlo Dolci and many others from Tuscan Baroque school. A lot of these paintings got beyond the Italian borders, as that one at the Zamosc Cathedral in Poland.

The huge success of Giovanni Brina’s picture resulted over time in painting and applied arts both, as proved by some mosaics and engraved stone items dated back to the early 1700 and kept at the “Botteghe Granducali”. Among them, we have to mention the greatly graceful wall plate Cosimo III Medici gifted Baden Marquise Augusta Sibilla. Today it’s at Badisches Landesmuseum in Karlsruhe.

Dated back to mid 1500, the painting we were asked to analyse recalls the typical stylistic patterns of that time. The Angel and Virgin’s facial features emphasize, for instance, the original rather than innovative elegance they were realised with, as well as their underlying hedonism and the whole scenic set-up of the painting, whose spatial elements were carefully drawn.

Resulting from an eclectic and sophisticated cultural code focusing on several pictorial trends, we can surely connect the picture to Giovanni Brina, whose artistic soul has been so interesting to be deeply analysed even recently.

Giovanni Brina was born in San Felice a Ema in 1534. Although less known than his brother Francesco, he moved with his family to Florence where, some years later, he was allowed to enter Ridolfo del Ghirlandaio’s atelier and, afterwards, Michele di Ridolfo del Ghirlandaio’s workshop. Thanks to them, Giovanni attended the “Arte dei Medici e degli Speziali” in 1559 and the “Accademia del Disegno” in 1563.

However, as influenced by the most popular artists of the period, his first artwork dates back to 1561 when he realised a fresco at Villa Strozzi chapel in Caserotta, San Casciano Val di Pesa. Then he carried out many other pictures for several places of worship in Montevarchi, Bibbiena, Borgo San Lorenzo and San Gimignano.

Late in the 60’s he opened with his brother his own workshop in Florence, where he realised a lot of works for people living in the Tuscan countryside. He carried out only a few paintings for the churches and monasteries in Florence, as those at San Salvatore di Ognissanti and San Domenico al Maglio. On the contrary, he painted a lot of religious images, as well as members of Medici family, on wood and canvas both, but for private dwellings only.

In 1575 he got married to Francesca Pagliauoli but, unfortunately, she died after a few years while giving birth to their son. Then, in 1582, he married Lucrezia Cavalcantini.

In addition to several pictures for private people, during the 80’s he realised a lot of paintings for ValdiNievole places of worship. Some of his altarpieces are located in the main churches of Buggiano.

Although his old age, in 1595 he moved to Pisa where Santa, his sister, lived with her family. According to some biographical documents, he died in Pisa between the 1598 and the 1599 (for further informations about the artist’s life, please see Nesi A., Lusvardi C., Giovanni Brina. Cristo e la samaritana al pozzo, Maniera Edizioni, Firenze, 2016, pp. 1-6).

Because of their similarities to the human graphical shapes Giovanni’s brother, Francesco, used for his works – as resulting from the comparison of the characters depicted in Deposizione con i santi Margherita e Lorenzo whose location is unfortunately unknown (see A. Bliznukov, Per Francesco e Giovanni Brina, Paragone, 54/2004, pp. 52-53 and tab. 52) – the graphical items of the painting are the same as those of Madonna del Rosario and Madonna con Gesù Bambino e quattro santi.

These altarpieces, dated back to 1580, are kept at Santa Maria abbey in Buggiano (see Nesi A., Giovanni Brina in ValdiNievole, Nebulae, 4/99, pp. 6-7). They are very similar to the painting we were asked to analyse, with particular regard to their figurative language, the plasticity of the clothes and the highly elegant pictorial definition whose outlining elements were stressed by some strong strokes.