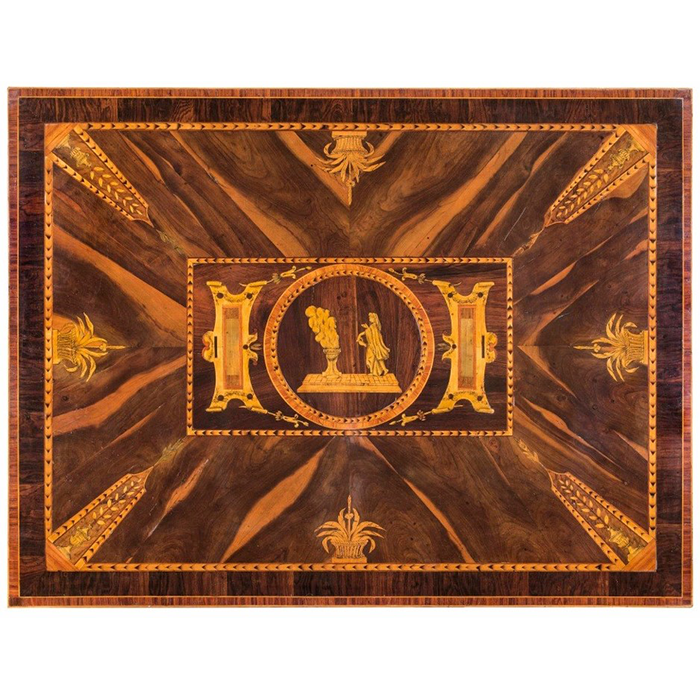 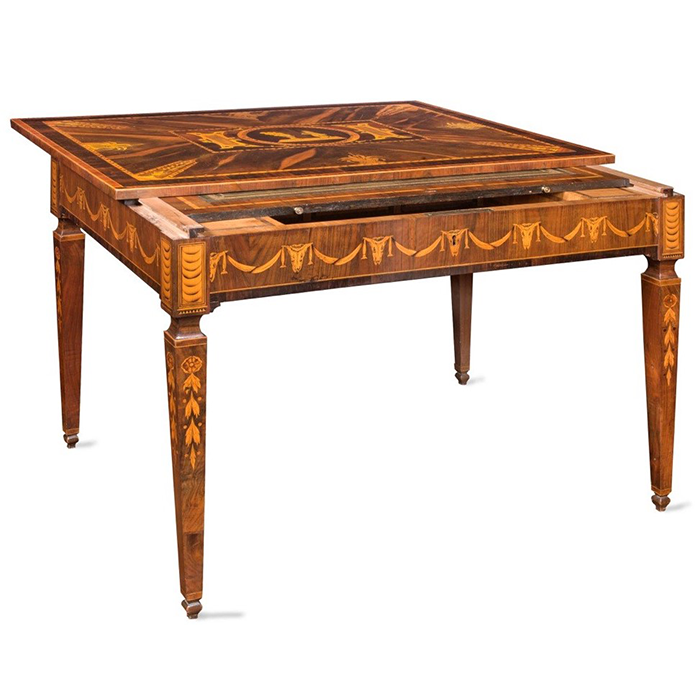 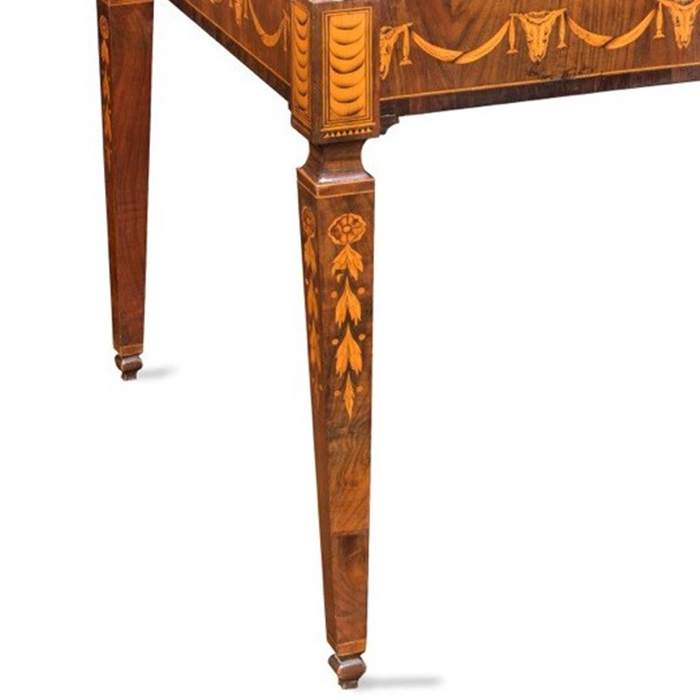 Under the moving bolster of the desk we can appreciate a smaller leathered wooden board. By lifting it up, an olive wood veneered compartment shows its drawers and two side tiny cases we may suppose writing and drawing materials were put into.

Such an artwork is very likely to be realised  in the late eighteenth century by some of the most important workshops in Florence, such as Francesco Spighi’s – a hugely skilled ebony carpenter – Marco Callestrini’s, Angiolo Ballatresi’s or Gioacchino Paoli’s.

The furniture and all its inlays were realised according to the neoclassical style which was very popular in Florence at that time. The coming-back ancient decorative patterns – such as those of Medici collections – and the revalued sixteenth century ornamental items can prove that.

In 1785, then, Francesco Luigi Levrier was appointed master decorator at Florence Art Academy. Inspired by the odd drawings of the most important Florentine buildings, he realised an astonishing series of similar works with Ildebrando Poggi and Carlo Lasinio.

Such an artistic trend, resulting from archeological and Renaissance features skilfully combined each other, was first improved by Ferdinand III as he was appointed Grand Duke of Tuscany in 1790. He asked Giuseppe Terreni to adorn the Winter quarter rooms on the second floor of Pitti Palace.

The writing desk we’re analysing was realised during this artistically thriving period. The scene at the centre of its moving bolster recalls the classical themes by showing a Vestal virgin close to the sacred fire. The side inlays bring back to the Renaissance Tuscan arts, as their ox skull shaped items can prove. Moreover, all the geometrical stripes and the rosewood veneered inlays lead us to focus on the central scene to recall the odd frescos inspiring Levrier and Poggi’s drawings we’ve just mentioned.

Francesco Spighi was one of the most skilled craftsmen realising writing desks like the one we’re analysing. According to the last number of Magazzino della Mobila magazine (1798, p. LV, fig. 85), several neoclassical cabinet works were sold at that time. Those realised by Spighi, according to the magazine reviews, were said to be “such astonishing artworks with some hidden cases, some moving devices, etc.” (Chiarugi 1994, pp. 88-89).

Unfortunately, none of Spighi’s products is today available, except for a writing desk now belonging to a private collection, which is very similar to that we’re analysing. It’s finely adorned with a plain geometrical inlay resulting from a Renaissance wood art technique known as “intarsio a toppo”. Similar artworks are today kept at Pitti Palace (Colle 1992, pp. 94-100), although the greater part of them belongs to some private collections mainly (Chiarugi 1994, pp. 92 – 98).

Nevertheless, according to some documents from Tuscan Gran Duchy local administration, many other craftsmen – as Gaspero and Pietro Landi, Giovacchino Paoli, Marco Calestrini, Matteo larti, Francesco Sebastiani, Angelo Ballatresi, Giovanni and Carlo Toussaint – were able to realise such writing desks. As Spighi’s,

their overturned obelisk shaped legs are finely adorned with geometrical items. Their inlays were engraved with a white hot iron tool. Their sliding and opening devices are then highly similar to those some German cabinetmakers created in Florence in the mid eighteenth century approximately.

The writing desk is then very likely to be realised by Francesco Spighi, whose austere Neoclassical carving style was hugely appreciated by Tuscan nobles and  Lorraine court both in the late eighteenth century.