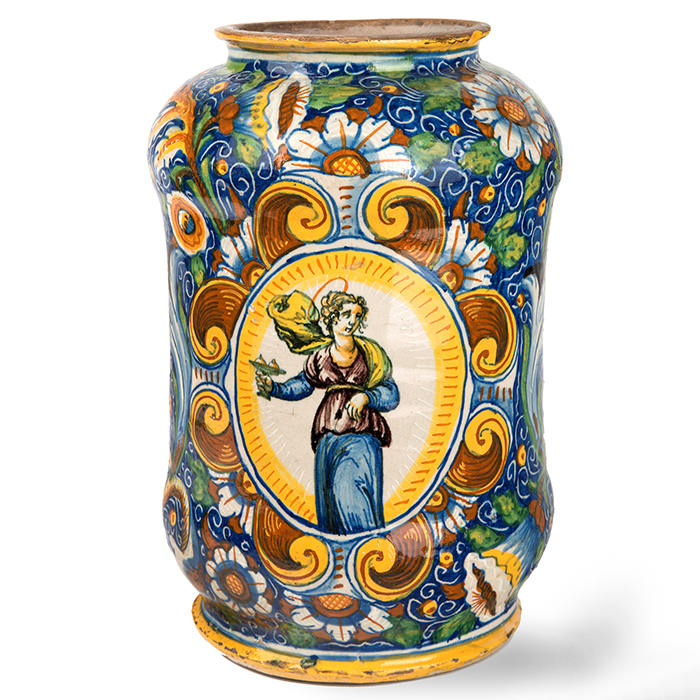 This refined apothecary vase was realised by Domenego De Dona Di Bethi, better known as Mastro Domenico da Venezia, in the mid sixteenth century approximately. Cylindrical shaped with a pronounced rim and a quite wide mouth, both its neck and lower body are smoothly tapered.

Mastro Domenica was born between 1524 and 1529, in accordance with the main historical sources. Jacopo Da Pesaro, whose daughter he married in 1546, is very likely to have steered Domenico to pottery production at his own Venetian workshop. That’s why we can connect some of his 1562 to 1568 artworks with San Polo, one of Venice’s most renowned districts.

A huge number of colours, resulting in lots of chromatic effects such as the shadings we may appreciate, is typical of Mastro Domenica’s mid and late artistic production. Several shades of yellow, from the darkest to the brightest, green and blue enhance his artworks.

In accordance with Venice painting tradition, Mastro Domenica considered the characters as seamlessly belonging to the surrounding. They are meant, in other words, to get each other enhanced. Most of the artworks bear the artist’s signature, the date, the workshop address and some words explaining what has been depicted.

According to Alverà Bortolotto (1981), Mastro Domenica’s early artworks were decorated with trophy looking items mainly. They were then replaced with some more refined floral and mythological elements.

To prove that, Bortolotto referred to the plate Mastro Domenica is said to have realised in 1557 (Victoria and Albert Museum, London). The tiny cupid its central part is decorated with would then be meant to represent such an iconographic replacement.

According to Liverani (1962), its shoulder decorative items recall the artist’s Venetian early experience. Some of his most refined works we could compare it to are today at Brunswick’s Herzog Anton Ulrich Museum.

We can ascribe the albarello we’re analysing to Mastro Domenico’s late production. During his adulthood, he used to decorate his vases with floral elements and medal shaped items bearing the effigies of saints and prophets. In addition to Brunswick Museum, we can appreciate such artworks in Stuttgart, Munich, Vienna, Kassel, Weimar, Berlin, London, Paris, Limoges and Sèvres as well.

Although he had unsuccessfully analysed San Polo church sources, Concina assumed Mastro Domenica died between 1569 and 1574 for two main reasons. On the one side, he’s supposed to have realised his last vases in 1569. On the other, no documents dating before 1575 were found.

Mastro Domenica Da Venezia was one of Venice’s most skilled sixteenth century artists. His finely adorned vases, like the one we’re analysing, are some of the most renowned, as all their amazing decorative items can prove. The floral, fruit, cartouche and medal shaped elements are then said to be the main trademarks of his polychromatic production.

The albarello we’re analysing is richly adorned with a refined flower arrangement on a deep blue background. Several daisies, whose bright white petals contrast with the yellow and pale blue pistils, are meant to get the vase lighter.

The central part of the body shows Saint Agatha, whose features are enhanced by the divine light shining at her back. Mastro Domenica was able to make them smooth by using the paints in accordance with a refined shading and contrast technique.

Because of his polychromatic artworks and his wild imagination, we could compare Mastro Domenica’s production with Andrea Schiavone’s. Both are then meant to recall the Venetian sixteenth century pictorial tradition