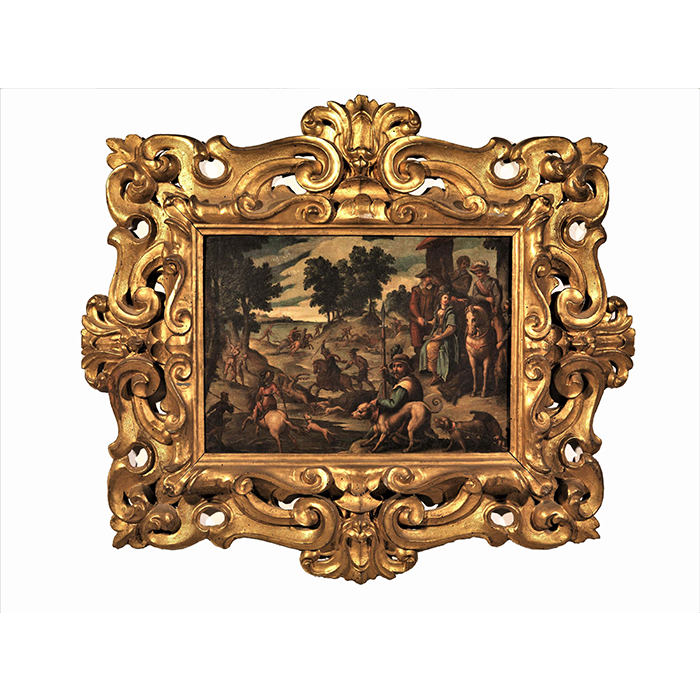 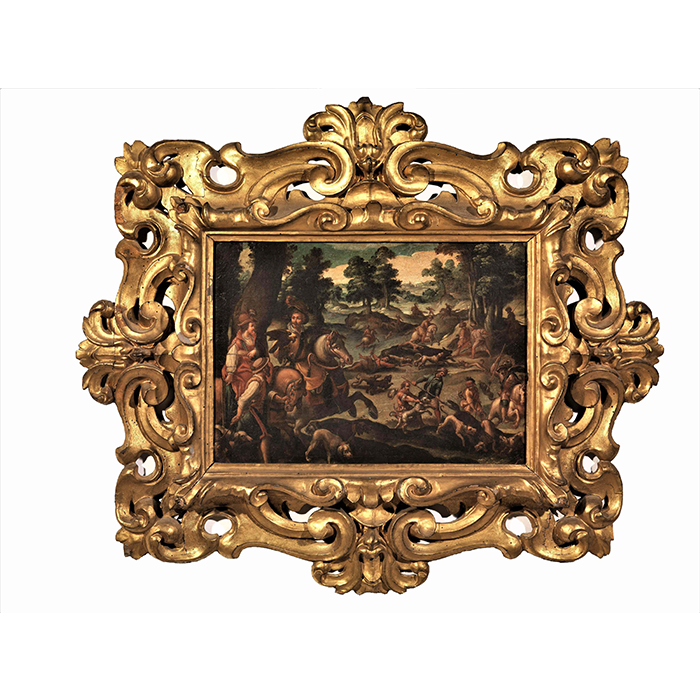 The artworks are well preserved within their amazing golden wood antique frames adorned with coils.

Two amusing hunting scenes are painted with a lot of characters in the foreground and in the background. They are completely surrounded by a beautiful wooded lanscape with wide clearings, creeks and majestic trees reaching such a brighting pearl-like clouded sky.

Because of the glazing paints the artist used, all the characters are vividly depicted. Both the pictures, as each pair of artworks, were realised according to the same pictorial symbolic codes.

Focusing on the first of them, a thick moustached falconier and a graceful lady on horseback are close to a servant with some dogs. They introduce us into the center of the scene, whose liveliness is improved by some energic hunters riding and chasing some boars. The way they were depicted emphasizes their extraordinary morfological traits, in order to be compared to the wolf looking animal in the foreground, whose fanciful features make the whole scene more realistic.

Although similar, even if not identical, we have to focus on the characters on its right side to better understand the second painting, whose main scene goes from right to left.

As close to the man with a spear, whose outwards looking sight makes him intent on talking with us, some noblemen are looking distractedly at the hunting. A woman, whose servant is protecting her from the sunlight with a parasol, is sitting by them.

The hunting scene, the main theme of the painting, emphasizes some deers being chased and brutally assailed by some fierce dogs in the central part of the painting as in the background. As the cerulean calm river, the lake it flows into is well emphasized to enhance the brightness of the whole landscape.

Antonio Tempesta was highly esteemed by literary critics and the keenest art collectors at that period.

He was born in 1555 approximately. He was introduced to painting by Giovanni Stradano and he entered the Art and Drawing Academy in 1576.

As he moved to Rome in 1580, he realised several frescos on Pope Gregory XIII’s behalf for some Vatican and Roman places of worship.

As of 1589 Antonio Tempesta carried out such lot of engravings he became one of European most important artists.

In the early seventeenth century his suggestive hunting and battle scene paintings, as well as his sacred and profane theme small pictures, led him to success in Rome. Therefore, by an artistic point of view, he was highly connected to Florence too, as his artworks for Medici family and Santa Felicita church can prove.

Both the paintings we’re analysing, although they belonged to Strozzi collection in Florence, have been on Tuscan antiques market since 1983 only, when they were sold by auction at Pandolfini’s, even if they were supposed to be from late XVI century Flemish School.

Because of the tight ties between Tempesta and Pietro Strozzi – Pope Paul V’s personal secretary, according to the engraved plate the artist gifted him – we can certainly ascribe both the artworks to Tempesta himself. Their highly refined frames, we may suppose to be realised for some important paintings at that time, enhance what we’ve just stated apart from belonging to such an important Florentine collection as Strozzi’s.

We can date both the pictures back to the early seventeenth century. Their compositional and stylistic patterns recall Giovanni Stradano’s artworks and the ones some other Florentine artists realised in the late sixteenth century. Deer and boar hunting monochrome picture, recently on show at Cambi’s in Genoa, is one of them.

However, we can get a further evidence supporting the authenticity of the paintings we’are asked to analyse by focusing on another element: the outward looking man with a spear in the foreground of Deer Hunting picture. His face is very similar to the 1621 self-portrait Tempesta gifted his friend Strozzi, who was said to be one of his most important followers as well.